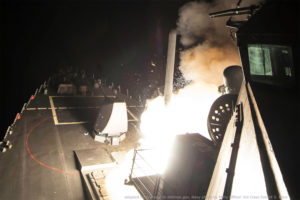 Moscow swiftly suspended an agreement with Washington for military coordination in Syrian skies on Friday following the U.S. missile attack on a Syrian base …. heightening concerns of more unpredictable reactions from … al-Assad’s backers, in particular Iran, to the U.S. strike, conducted in retaliation for a suspected regime chemical attack on a village. It threatens to derail the delicate alliances that have allowed a multi-nation campaign against Islamic State to churn along, despite major political disagreements between the U.S., Russia, and Turkey on parts of the fight, including on whether Mr. Assad should stay in power. * * * Some lawmakers expressed hope that a trip by U.S. Secretary of State Rex Tillerson to Moscow next week would help Moscow and Washington coordinate positions.