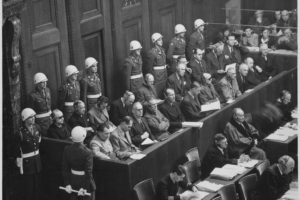 Standard Western accounts of The Nuremberg Trials fixate on key figures like Justice Robert H. Jackson, the U.S. chief prosecutor and Supreme Court judge, as well as the United States’ integral role in launching the trials and thus the field of international law. While this assessment may satisfy American nationalism, it is woefully inaccurate and incomplete.

In Francine Hirsch’s insightful new book SOVIET JUDGMENT AT NUREMBERG: A New History of the International Military Tribunal after World War II (Oxford – July 2020), which is based on extensive research into previously off-limits Soviet archives, she brings to light the full story of the Nuremberg Trials, one in which the Soviet Union was a defining player. A comprehensive history as well as a human interest story, SOVIET JUDGEMENT AT NUREMBERG introduces important characters such as the largely unknown Aron Trainin, a Russian Jew and contemporary of Raphael Lemkin, who pushed for the creation of an international court in his academic writing and introduced the idea of “crimes against peace” and “complicity” well before other Allies were on board.

While Hirsch unearths how the Soviets contributed to the framing and staging of the International Military Tribunal, she also shows how they struggled at Nuremberg because of the particularities of the Stalinist system – Stalin’s strict centralized structure of leadership meant Soviet prosecutors were often out of the loop and left without instructions. Additionally, she explores how the Soviets took for granted that the IMT would be just another show trial in which Nazi guilt was a given. They did not anticipate that the Nazis would be given a fair trial, or that incriminating evidence of their own war crimes would make its way into the public eye. What’s more, Hirsch uncovers evidence that suggests members of the Soviet delegation seemed to be unaware of these crimes, thus going into Nuremberg blind.

Overall, in challenging readers to rethink their ideas about the International Military Tribunal, SOVIET JUDGEMENT AT NUREMBERG offers both a new understanding of Nuremberg as a Cold War battleground and a new interpretation of the origins of the postwar movement for human rights.

“Indeed, Hirsch brilliantly accomplishes her central aim: ‘putting the Soviet Union back into the history of Nuremberg trials.’ In so doing, the book offers a valuable new addition to the Nuremberg canon, filling a gap in the literature with new research, an engaging narrative style, and delightful details…” — Beth Van Schaack, War on the Rocks

“Fifteen years in the making, drawing extensively on Soviet archives, Francine Hirsch’s wonderful book freshly illuminates the paradoxical Soviet impact on the trial of Nazi criminals as well as the inner workings of the Kremlin as it navigated the onset of the cold war.” — William Taubman, Pulitzer Prize-winning author of KHRUSHCHEV: THE MAN AND HIS ERA and of GORBACHEV: HIS LIFE AND TIMES

Francine Hirsch is the Vilas Distinguished Achievement Professor of History at the University of Wisconsin-Madison and the author of Empire of Nations.