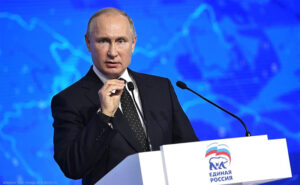 Smart Voting, an idea that Navalny came up with in 2018, is an online strategy designed to promote candidates that have the best chance to defeat those from United Russia, the Kremlin-linked ruling party.

It doesn’t, however, promote any particular opposition party or candidates.

Russians vote on September 17-19 for a new State Duma, along with legislatures in 39 regions, and nine regional governors.

The Smart Voting list, published by Navalny’s associates on September 15, recommends 137 Communist Party nominees, 48 candidates from the A Just Russia party, 20 Liberal Democrats, and 10 from the liberal Yabloko party. A handful of candidates for other parties are also recommended.

Few genuine Kremlin critics have been allowed to run in the elections, seen as a key part of President Vladimir Putin’s efforts to further cement his hold on power heading into the next presidential balloting, scheduled for 2024.

“Russia is holding elections to the State Duma from Sept. 17-19. United Russia will try to stay in power for another five years,” Navalny’s YouTube channel said in a video accompanying the recommendations.

“We can prevent this with the help of Smart Voting, a strategy that allows you to combine the voters’ ballots against United Russia,” it said.

Navalny’s team has implemented the Smart Voting system twice in regional elections over the past two years — with largely successful results. In 2019, it helped opposition candidates win 20 of 45 seats on the Moscow City Duma, while in regional elections last year United Russia lost its majority in legislatures in the cities of Novosibirsk, Tambov, and Tomsk.

The Smart Voting project was launched so Russians could see which candidates were likely to defeat those put forward by the Kremlin-backed United Russia party.

In the past, the strategy has been promoted mainly through e-mail and websites. This year, Navalny’s team rolled out a downloadable app to help guide voters.

Navalny is hoping to build on those successes and the declining popularity of United Russia amid the Kremlin’s flagging efforts to deal with an economy hit by the coronavirus pandemic and years of ongoing international sanctions.

In response to opposition efforts to loosen United Russia’s hold, authorities have unleashed a sweeping crackdown against Navalny’s allies and supporters, as well as the independent media, in recent months.

Navalny, who is Putin’s most vocal domestic critic, is serving a 2 1/2-year jail sentence for parole violations on a conviction he says was trumped-up. His foundation has been designated as an “extremist” organization.

His jailing has strained Moscow’s relations with the West, which has demanded that he be freed.

Meanwhile, security officials have broken up — sometimes violently — rallies and demonstrations in support of Navalny.

The Moscow directorate of the Supreme Court’s judicial department said earlier this month that almost 7,000 people were convicted and sentenced in the first half of this year alone for violations of the law on public gatherings in the Russian capital.

About 90 percent of those cases ended up with convictions. Of those convicted, 1-in-5 were handed jail sentences.