Lenin At 150: Even Without COVID-19, Russia Was Set To Snub The Soviet Union’s Founder 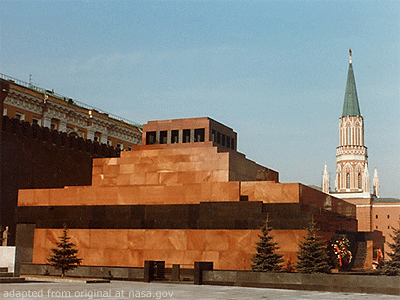 When the 100th anniversary of Vladimir Lenin’s birth rolled around in 1970, the Soviet Union pulled out all the stops to mark the occasion. Commemorative stamps were printed; coins were minted; medals were struck. A vast new wing was opened at the Lenin museum in Ulyanovsk, the Volga River city where he was born and raised. In Kurgan Oblast, a vast grove of trees was planted to spell out “Lenin 100,” a living monument that can be seen from space 50 years later.

The country, and the entire Soviet bloc for that matter, capped off two years of preparations with a Communist Party meeting in the Kremlin addressed by General Secretary Leonid Brezhnev. Chairman of the Presidium of the Supreme Soviet Nikolai Podgorny opened the event by saying: “What Lenin did during his spectacular life is not something for 100 years, but for the ages, for millennia.”

Yet on Lenin’s sesquicentennial, April 22, the country he created no longer exists and its successor state — Russia — seems decidedly uninterested in marking 150 years since his birth. Even before the coronavirus pandemic hit, only the most diehard Communists remaining in Russia seemed even to have noticed the anniversary. By contrast with the past, the silence seems deafening.

In Russia today, under President Vladimir Putin, Lenin’s memory is caught between what analysts say are two primary ideological currents of the ruling elite: the lionization of Soviet dictator Josef Stalin — whom Lenin described as “too coarse” in his final political testament, urging Stalin’s removal as general secretary — and nostalgia for Russia’s pre-Soviet tsarist past, which Lenin despised and sought to destroy.

“Those who are more sympathetic to the Soviet past continue to worship, or at least repeat the algorithms of, Stalin,” said historian and professor Konstantin Morozov of Moscow’s Higher School of Social and Economic Sciences. “This part of the elite supports everything that is Soviet including, of course, Lenin, who peeks out from behind Stalin’s back.”

“The other part of the elite tries to connect itself with tsarist, imperial Russia,” Morozov told RFE/RL.

When Russian state television conducted its 2008 Name Of Russia competition to determine who Russians viewed as the most notable personality in Russian history, Lenin finished sixth, lagging behind Stalin and late tsarist Prime Minister Pyotr Stolypin, among others.

Putin has at times reflected both of these modern-day trends, famously praising Stalin as an “effective manager” and, in 2016, saying that Lenin “planted an atomic bomb underneath the building called Russia, and later it blew up.”

Lenin is being snubbed now, Morozov said, for the same reason that the 100th anniversary of the 1917 Bolshevik coup that Lenin led passed three years ago “without fanfare or pomp.”

For Putin, who has suppressed dissent over 20 years in power as president or prime minister and has repeatedly said that stability is crucial, a problem with Lenin is that he was a revolutionary.

In a reference to the Bolshevik Revolution during his annual state-of-the-nation address later in 2016, Putin said that coups invariably lead to “the loss of human life, casualties, economic decline, and misery.”

Lenin’s image also suffered as a result of the “archive revolution” that occurred in the years before and after the Soviet Union’s 1991 collapse, said historian Nikita Sokolov, chairman of the independent Free Historical Society.

“Beginning with perestroika, everything about Lenin was published,” Sokolov said, referring to the reforms ushered in by the last Soviet leader, Mikhail Gorbachev. “He was indubitably a criminal. It was documented and proven that he had rivers of blood on his conscience.”

“But the archives of the KGB and the special files of the Central Committee, where everything about Stalin was kept, remain secret to the present day,” Sokolov added. “Historians are still arguing about whether he signed the protocols for Katyn [the World War II-era executions of thousands of Polish officers by Stalin’s secret police] or not. That is one reason why attitudes toward these figures are so divergent.”

The effect of opening the archives was bolstered by the fact that for decades Lenin, who died in 1924, had been reduced to a Soviet “pop-culture icon,” said German writer Tomas Martin.

“Even before the collapse of the Soviet Union, he was a sort of friendly zombie, the late grandfather of the Union, pottering around the mausoleum – a fate that Stalin never endured after his death,” Martin told RFE/RL.

Lenin’s Western-oriented, internationalist world view also clashes with the prevailing currents in Russia today. It would be incongruous for a government set on tramping down “color revolutions” wherever they occur to set too high a store on the reputation of a man who generally supported national self-determination and anticipated world revolution.

But historian Morozov sees a deeper significance in the Putin government’s aversion to Lenin. He argues that Lenin was an opportunist who never maintained a consistent political vision, but instead maneuvered constantly to increase his own power.

“From this perspective, the main thing about Leninism that remains to this day…is a lack of respect for his own people and a tendency to view oneself as the subject of history. Not the people or society but oneself. This is nothing new — it is seen throughout the history of authoritarianism — an alienation from the people and a tendency to view the people as clay or material for one’s own creations. In this regard, we still need to shed Leninism.”

Putin, while he calls himself “your humble servant” and professes to have the interests of Russian citizens foremost in his mind, has made remarks about demographics and other issues that have led critics to say he sees the people as a means to an end.

Lenin “was an absolutely unprincipled person,” said Sokolov. “Cynical, absolutely political, an opportunist for whom no principles existed. He was ready to justify any action if it could be useful to him at a particular moment.”

For Lenin, the historian argued, there was only one consistent position.

“He was a fundamental believer in violence as the solution to any problem,” Sokolov said. “We see this at every stage of his development beginning at the very start, which I studied when I wrote my dissertation about the famine of 1891. Lenin, who was 20, argued against giving charitable aid to the peasants and destroyed the work of the Samara charity committee, arguing that one shouldn’t improve their lives” but instead let them “become bestial and unleash monstrous violence.”

“We see exactly the same thing later from the dissolution of the Constituent Assembly and the introduction of the Red Terror,” he said, referring to two key events of the early postrevolutionary period when the Bolsheviks violently dispersed a body set up to create a new constitution for Russia and adopted a policy of political violence, repression, and terror during the 1918-22 Civil War.