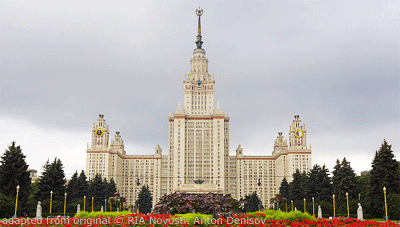 “In its 874-year history, Moscow has grown from an obscure twelfth-century military outpost into a world-class capital city of over 20 million inhabitants. Along the way, the city has been reinvented over and over to suit the needs of its rulers. Ivan the Great made Moscow “The Third Rome” after the fall of Constantinople in 1453, raising stone cathedrals inside the Kremlin whose golden domes still characterize the city’s skyline. Peter the Great relegated Moscow to second-city status when he transferred the capital to his newly minted St. Petersburg, and in doing so, made Moscow a center of conservative thought and Orthodox belief: Moscow’s famed forty-times-forty churches soared above the city’s two and three-storied secular edifices.

When Vladimir Lenin moved the capital of his nascent Bolshevik state back to Moscow, he overtly turned his back on St. Petersburg’s imperial legacy while also recognizing that it would take a Herculean effort to turn Moscow into the global capital of the new communist world. The story of that effort is the subject of Katherine Zubovich’s new book “Moscow Monumental: Soviet Skyscrapers and Urban Life in Stalin’s Capital.”

Professor Zubovich brings mastery of Russian and Soviet history together with an extensive understanding of art history to tell the engrossing story of how Moscow’s modern skyline took shape in the turbulent 20th century. In an engaging style that draws on diaries, memoirs, letters, and meeting minutes, Zubovich first chronicles the government’s ambitious plans to construct a massive Palace of Soviets on the spot where the new Christ the Savior Cathedral stands today. This is a challenging task as the former monumental edifice was never built, but Zubovich brings to life the evolving plans for this centerpiece of the new Moscow ensemble, including pre-war efforts to involve Western architects and engineers to facilitate the construction of something utterly foreign to Russian architecture: the skyscraper.

Moscow’s skyline today is dominated by the seven Stalin-era “vysotniye” or “tall buildings,” which were originally planned as satellites around the central Palace of Soviets. These buildings — often known among foreigners as “Stalin’s wedding cakes” — ultimately were built, and to this day serve their original purpose: two are ministries, two are hotels, two are residential buildings, and the largest is the central building of Moscow State University. At first glance — or even after several decades — the seven may seem identical, but “Moscow Monumental” recounts that they are anything but. The stories of their planning and eventual construction spans the decades before and after World War II and features some of the most famous names in Soviet History.

But it is lesser-known personalities who come to brilliant life in “Moscow Monumental” in stories of those who built the skyscrapers and of those whose lives that were disrupted by their construction. It is this aspect of “Moscow Monumental” that gives the book such universal appeal: Zubovich has done stellar work in the city’s archives, uncovering a trove of letters and petitions from ordinary Soviet citizens, who ask for help in relocation as their homes are demolished to make way for the new buildings, or who make their case for the right to occupy an apartment in the new houses. This central tension between the Muscovites who are moving “up” the new Soviet hierarchy and possibly into the upper floors of the buildings on Barrikadnaya or Kotelnicheskaya and those who are moving “out” to the inelegant and barely cobbled together new suburbs makes “Moscow Monumental” far more than a study in urban planning. This is a book which delves into the very human tensions created by a society forced into transition, and the effects on a city undergoing a seismic political, cultural, and architectural change.

Excerpt from Chapter 6 of “Moscow Monumental …. ”