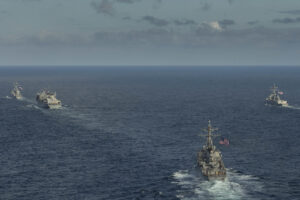 “The Navy is eyeing a tougher posture in the Arctic to push back against Moscow … [T]op Pentagon officials said … the U.S. could launch ‘freedom of navigation’ operations near Russia’s Arctic coastline. Such operations would resemble Navy exercises in the South China Sea, an area in which American ships regularly contest growing Chinese territorial claims. Officials believe similar movements may be needed in the Arctic as Russia tries to seize strategically vital sea routes as their own. …”