Facebook Flirts With Local Geeks in Battle for Russia 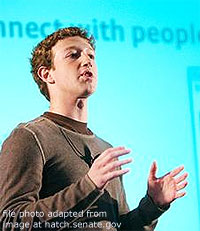 Looking for a public bathroom in Moscow? Facebook Inc. (FB) has you covered.

Still a dwarf in Russia, the world’s largest social network is courting local geeks to build apps tailor-made for their home market. Its goal is to win over users in Europe’s most populous country and catch up with local rivals VKontakte and Odnoklassniki, which combined attract 10 times more traffic.

Founder Mark Zuckerberg hosted about 200 developers in Moscow this week in a six-hour competition to create apps meant to get people to sign up and log in daily. An app mapping Moscow’s toilets was on the list, while a Russian-made tool to boost your friendships through Facebook got top spot.

“The reason people love Facebook is because they can play games on it or because they can get their music there,” said Julien Codorniou, Facebook’s head of game partnerships in Europe. “To get ahead in Russia, we need Russian developers who can develop great content in Russian.”

In Russia, Facebook is behind — its 3.5 million daily users compare with VKontakte’s 22 million and Odnoklassniki’s 16 million, data by research firm TNS Global shows. Menlo Park, California-based Facebook is betting that new apps will attract more traffic, and that its global scale of 1 billion users will convince Russian developers to jump ship.

Facebook needs to win over those trying social networking for the first time, while also persuading VKontakte and Odnoklassniki users to sign up on a second platform. About 63 percent of Russia’s teens and adults use the Internet, up from 39 percent five years ago, according to TNS Global, leaving growth potential. Russia’s population is 143 million.

“There are few places in the world that have such a large number of potential users,” said Brian Blau, an analyst at researcher Gartner in San Francisco. “Internet penetration is still not that high, so there’s room to grow and Facebook has to be there when more Russians sign up to social networks.”

Facebook is looking to replicate the success it had in Brazil, where it came from behind to surpass a strong incumbent. Orkut, which had a head start and dominated the country’s social-networking market for years, ceded its No. 1 position to Facebook in December, according to ComScore Inc.

Zuckerberg, who is 28 and ranks 82nd on the Bloomberg Billionaires Index with a personal fortune topping $11 billion, told Russian developers that reach was Facebook’s main advantage over local competitors.

“The biggest opportunity for building on Facebook for you guys — instead of the local networks — is the opportunity to reach almost a billion people,” Zuckerberg said during what was his first visit to Russia, addressing the crowd at the event near Kremlin, in Moscow’s former chocolate-factory district characterized by red brick walls and bay windows.

In his Russia push, Zuckerberg is up against a fellow billionaire, Alisher Usmanov, whose Mail.ru Group Ltd. (MAIL) controls Odnoklassniki and owns 40 percent of VKontakte. Ksenia Chabanenko, a spokeswoman for Mail.ru, declined to comment.

The gap between VKontakte and Facebook “has been widening” in recent years, Pavel Durov, the founder of the social network also known as VK, said by e-mail. “We feel no need to protect our home markets. The question is rather — can Facebook hold on to its hegemony in the world?”

Pushing app development is also a way for Facebook to add new revenue sources, as it faces investor pressure to boost sales. Facebook gets about 85 percent of its revenue from advertising, and the rest comes from the 30 percent cut it gets on sales that developers generate through its platform.

“Attracting developers in different parts of the world is critical,” Gartner’s Blau said. “They create the content which will drive more people on the site and keep them coming back.”

As of yesterday, Facebook’s stock has lost 43 percent since the company’s initial public offering in May. St. Petersburg- based VKontakte shelved its planned IPO after Facebook shares plunged. Facebook fell 1 percent to the equivalent of $21.64 at 9:52 a.m. in Frankfurt trading. Mail.ru declined 0.6 percent to $32.30 in London.

One Moscow-based developer, Game Insight, was among the first in Russia this year to add Facebook to its list of supported platforms, which so far included VKontakte as well as Apple Inc. (AAPL)’s and Google Inc. (GOOG)’s mobile operating systems.

“Russia has become one of Facebook’s priorities and management is paying attention to it,” said Alisa Chumachenko, Game Insight founder and chief executive officer. “Developers are excited that Zuckerberg is here. Facebook is set to show fast growth in Russia now.”

Sometimes referred to as the Russian equivalent of Zynga Inc. (ZNGA), Game Insight was founded in 2010 and employs more than 400 people. Its “Airport City,” a city-building game, and “Mystery Manor,” a clue-finding adventure, have both passed the one-million user mark on Facebook.

About a third of the 34 apps built during the Facebook contest this week were games, made by developers hoping to replicate Game Insight’s success. Some chose to port existing apps from VKontakte to Facebook to save time. In one demonstration, programmer Jacob Ilin flipped his “Cut a Sheep,” a puzzle game revolving around a herd of sheep, in less than six hours.

“BoostMate,” an app for managing one’s friendships using Facebook, won the first prize in the event. Its maker, Ashot Golovenko, said he plans to hire more programmers to turn the beta version into the final product.

“You only need one local success story to get people on board and even reshuffle the cards in a market,” Facebook’s Codorniou said. The executive got promoted last month from Facebook’s Paris office to head gaming partnerships across Europe, Middle East and Africa and is now based in London.

Codorniou, who plays number-crunching game “Numbers Together” daily with his Facebook friends on his PC and iPhone, said Russia is on top of his priority list, along with partnering with developers in Israel and with builders of mobile applications.

“There’s already a dozen success stories in Russia,” Codorniou said. “We want to put them forward and get others on board, with the argument that if you want to go big on the Web and on mobile, you’ve got to go Facebook.”