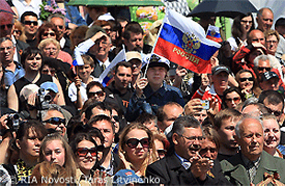 Anatoly Vishnevsky, the Russian demographer who like his American counterpart the late Murray Feshbach showed how demographic statistics can illuminate a larger slice of reality than most people had ever thought possible, has passed away at the age of 85.

Many have rushed to write appreciations of Vishnevsky but perhaps the best so far comes from Andrey Kolesnikov of the Moscow Carnegie Center who says that as important as the late scholar was as a demographer, he was even more important as a social thinker (vtimes.io/2021/01/16/priklyucheniya-v-strane-nezavershennoi-modernizatsii-a2527).

Vishnevsky was born in 1935, the same year in which Stalin proclaimed that “life has become better, comrades, life has become happier.” The late scholar spent his career showing why this did not happen and what Russia would have to do if it was to break out of the cycle which has made that slogan impossible to fulfill.

He did that, Kolesnikov continues, by focusing not just on demographic questions and not just on Russia but by studying the problems of modernization not only under Stalin but under other leaders as well. And he took many people with him because he based his arguments on the incontrovertible evidence of demographic facts.

By doing this, the Carnegie scholar says, “Vishnevsky converted his humanitarian searching into an exact science.” Perhaps the clearest example of this was his concern about Russia’s high mortality rates, about which he pointed out the unwelcome truth that Russians are dying not as they did in the past and not as others do in modern societies.

Instead, they are dying in large part because the Russian government has chosen to pursue what he referred to as “conservative modernization,” that is, the state sought to modernize in the name of keeping things the same, an inherent contradiction that it has never been able to resolve and that has cost so many Russians years of their lives.

One can cite Vishnevsky’s observations “by the kilometer,” Kolesnikov says; but one must be recalled on the occasion of his death because it shows the way his mind worked and how he dealt with the central issues with which he was concerned right up to the time of his death, issues that arose from his understanding of Stalin, Putin and much else.

“Mobilized mechanisms, which allow for assembling all forces into a single fist at critical moments are not suitable for long-term use. If they are used for too long, they become dysfunctional and ineffective. This relates particularly to Soviet mobilization mechanisms of the semi-feudal type which were more oriented on the preservation of the system than on its development … Here lies the main root of the problem: revolutionary goals and conservative means enter into a contradiction which cannot be resolved.”

Vishnevsky was “a real scholar” and did not let his political views interfere with his work, but he was concerned with how the challenges of rapid modernization were leading to archaic developments not only in Russia but in other countries in which many have not reacted well to change.

It thus turns out, if one follows Vishnevsky’s logic, that “”it is not liberalism which ahs died; it is the citizens of our country who are dying in its absence.” And unfortunately there are analogues elsewhere tool. The late scholar saw this as the explanation for the rise of Trumpism in America.

Vishnevsky was convinced that it could be opposed successfully, but to do so, he remarked, “one must first understand the meaning of what is taking place.” His research did much to promote that kind of understanding. He will be missed by all those who care about Russia, about modernization, and about a better future for all people.