Open economy should be created in Russia – Putin

ST. PETERSBURG. April 28 (Interfax) – Raising private investment for different economic sectors, including the defense industry, is one of the key paths for the development of the Russian economy in general, President Vladimir Putin has said. 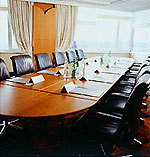 “Raising private investment is one of the general paths of economic development as a whole. It is one of the main points that should be included in the agenda of Russian economic development. I am speaking about the need to secure private investment – both domestic and foreign,” Putin told the Russian Popular Front’s 2nd forum of independent regional and local media companies on Tuesday.

“We ought to create an open economy,” the president said.

“Unlike our partners, we invite all possible investors – both domestic and foreign – to participate in investment in the Russian economy,” Putin said.

Private investment should also be secured for defense industry enterprises, the president said.

The government’s stance concerning the defense industry, which is quite sensitive for the state, is that even today such enterprises should think about manufacturing certain civilian products, he said.

“In this sense, we see nothing wrong about raising private investment for this industry,” Putin said.

When asked by one of the participants in the forum about the possibility of privatizing a state-run butter factory in the Vologda region, the president said: “There should be no ban on privatization in our country. Rather, what we should not have is misappropriation of state owned assets or situations where they are given away for next to nothing.”