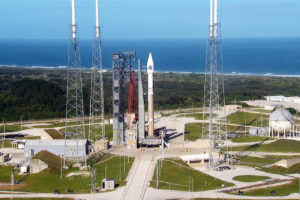 When President Barack Obama came into office, the fact that Russia sold the U.S. the rocket engines it needed for launches was a feature of U.S. foreign policy, not a bug. Obama was trying to reset the U.S. relationship with Moscow, and that meant finding areas where the two former Cold War rivals could cooperate. If the U.S. would rely on Russia to deal with Iran and supply troops in Afghanistan, why not rely on Russia to get satellites into space?

But that was 2009. In 2016 this dependence is very much a bug. Today, Russian aircraft buzz U.S. vessels on the Baltic Sea and bomb U.S.-supported rebels in Syria. Today, the U.S. sanctions officials close to Russian president Vladimir Putin for his invasion of Ukraine.

The contractor that performs the space launches for the U.S. government, United Launch Alliance, a joint venture between Boeing and Lockheed Martin, says the Russian rockets are cheaper than the American alternatives. Two senators from states where these defense contractors employ many people — Richard Shelby, Republican of Alabama, and Richard Durbin, Democrat of Illinois — favor an amendment that would let the U.S. buy twice as many Russian engines as McCain favors. That would allow for more launches, and more related work in those two states.

In a telephone interview, McCain was blunt about this amendment. “If they are able to prevent us from moving off these Russian-built rocket engines, it’s corruption,” he said. “It’s not an accident that the senators from Alabama and Illinois are the ones pushing for this amendment.”

Of course, employment in those states is not the only case for buying more engines and launching more rockets. Shelby has argued in particular that the Russian rocket engines used by the Boeing-Lockheed joint venture have performed flawlessly, whereas some of the alternatives are untested.

Even still the Russian rocket engine business is murky. A 2014 investigation by Reuters found that a small five-person company based in Florida stood to make nearly $100 million from padding the cost of the Russian RD-180 rocket engines it then resold to United Launch Alliance.

How we got here is instructive. In 1996, President Bill Clinton authorized the use of Russian rockets for commercial space launches and later for more sensitive national security missions. But at the time, this policy was supposed to be a stopgap measure. Initially, the Pentagon had planned to exclusively use American rocket engines for space launches by 2000. Over time though, that deadline was pushed back because the cost of making engines in the U.S. is significantly greater. The latest deadline for U.S. rocket engine independence is 2020, and some Pentagon officials now say even that may be too ambitious.

Today the United Launch Alliance says its Delta IV rocket, which uses an American engine, is up to 30 percent more costly than the Russian variety used for the Atlas V rocket. SpaceX, the private space launch company owned by Elon Musk, is hoping to provide a cheaper alternative without using Russian engines. But SpaceX has yet to launch a spy satellite into space for the U.S. government, whereas the Boeing-Lockheed joint venture has managed more than 100 launches since 2006 without ever losing a payload.

Nonetheless, the arrangement with Russia on rocket engines undermines U.S. sanctions today against Russia for its 2014 invasion of Ukraine. The Daily Beast reported last month that the U.S. purchase of Russian rockets is enriching two senior Russian officials, Dmitry Rogozin and Sergei Chemezov, who were sanctioned in 2014 for the Ukraine invasion. In 2015, Putin placed Rogozin and Chemezov in charge of Russia’s space industry.

Evelyn Farkas, a nonresident senior fellow at the Atlantic Council who served in 2014 as the deputy assistant secretary of defense responsible for Russia policy, told me the U.S. reliance on Russian engines was discussed in 2014 when the Obama administration was developing its response to the invasion of Ukraine. “We were encouraging our colleagues working on the space policy to find a way to get us off the dependence on the Russian rockets,” she said. “By now we should have figured out a way to wean ourselves off the Russian rockets.”

McCain has also asked the Treasury Department’s Office of Foreign Assets Control whether the purchase of the Russian rockets violates the 2014 sanctions. So far, the Treasury has said it has not. McCain told me that he is waiting for a formal response to a letter he wrote this year to Treasury Secretary Jack Lew.

For now, McCain said he doesn’t know whether his provision to phase out the purchase of Russian engines will pass when the Senate considers the defense budget.

The outcome of that vote will be instructive. But it also brings to mind a larger principle. For years, many Republicans and Democrats were optimistic that partnerships with aggressive states could tame them over time. Now the U.S. is paying the price for this optimism, as it relies on Russian engines to launch the satellites that keep tabs on Russian aggression.