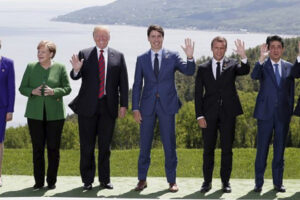 Western sanctions have had an “outsized impact” on targeted Russian companies but may have actually strengthened President Vladimir Putin’s grip on the country’s tycoons, an economist and former State Department official says.

Russian corporations have lost almost $100 billion since sanctions were imposed in 2014 following the annexation of Crimea, an amount equivalent to about 4.2 percent of the country’s economy at the time, said Daniel Ahn, the chief U.S. economist at BNP Paribas and former deputy chief economist at the State Department.

Putin’s attempts to shield some of those companies from the sanctions through tax breaks, state contracts, and other methods increased the total impact of sanctions on the economy to 8 percent, a number that is larger than other studies, he said.

“So 8 percent is not anything to sneeze at. It is a big number,” said Ahn, speaking during a virtual conference on December 7 organized by the Kennan Institute.

Ahn co-authored a study on sanctions with Rodney Ludema, a professor at Georgetown University in Washington and the former chief economist at the State Department. The study was published last month in the European Economic Review.

Western sanctions against the Kremlin have been hotly debated in recent years, with some arguing that they have had little impact on the Russian economy or on Putin’s behavior, pointing to Moscow’s continued interference in Ukraine as an example. Others argue the sanctions have constrained Putin from undertaking even more aggressive action internationally and have weakened his domestic support.

There had been some hope that the sanctions would drive a wedge between Putin and the tycoons whose fortunes were damaged by them. Ahn said the opposite might have happened.

Putin used the state’s resources to deflect the impact on certain companies, especially those in the defense and technology sphere, making the tycoons even more dependent on the president.

“By controlling the ability of who to shield and who not to shield, the Russian regime has tightened and consolidated its hold over critical sectors of the economy,” he said.

Ahn told the conference his study of the impact of sanctions differs from those conducted by others, such as the International Monetary Fund (IMF), because he and Ludema focused on the effect on corporations — or the microeconomy — rather than the macroeconomy.

He said Russian companies dependent on Western imports for producing their goods or services had been much more impacted than companies exporting to the West.

“By denying key Western financial, legal, technological, and other services that may account for a relatively small amount of value added, but are actually critical for the operations of a company, we have had an outsized impact upon the Russian economy,” he said.

However, he said Russia had taken steps to insulate its economy, including from the Western financial system, and thus sanctions will have diminishing returns going forward.

Ahn said he was surprised to discover that U.S. sanctions have had a greater impact than European sanctions even though Russia’s economy is much more dependent on Europe.

He chalked that up to tougher enforcement by U.S. authorities of the sanctions regime, including fining companies for noncompliance. He also said that European sanctions tended to target political figures rather than businessmen.

Congress, she said, needed to take a “360-degree view” of the consequences of sanctions because U.S. companies “are getting slammed” in the process.

“It really is incumbent on our policymakers, including those in Congress, to consider making sanctions conduct-based and targeted in such a way that they’re considering the impact on U.S. companies, on U.S. national economic interests, and our U.S. global competitiveness,” she said.

U.S. companies could lose out on business to Chinese firms in Russia, she said.

Levinas said U.S. sanctions-policy development could shift back to the White House from Congress when President-elect Joe Biden takes office next month.

While some have speculated that Biden could impose more sanctions on Russia, Levinas said a lot “will depend on Russia and its actions.”