US Expects No Breakthroughs during Gottemoeller’s Moscow Visit 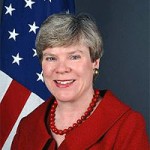 WASHINGTON, February 12 (RIA Novosti) – The US Department of State said on Monday no breakthrough decisions should be expected from top US arms control official Rose Gottemoeller’s visit to Russia.

“Gottemoeller is on her way to Moscow. My understanding is this is a broad conversation about all of the issues that fall under her portfolio, including implementation of New START. I don’t have anything new to announce to you with regard to further cuts,” US Department of State Spokesperson Victoria Nuland said.

The visit comes amid signals from Moscow and Washington that both sides are open for talks about renewing a decades-old armaments disposal program set to expire in June.

Russian daily Kommersant reported earlier this week that Gottemoeller, the US undersecretary of state for arms control and international security, will propose further cuts in Russia’s nuclear arsenal during her visit on February 12-15.

Russian officials said in October that the Kremlin is not interested in extending the Cooperative Threat Reduction Program (CTR) – broadly referred to as the Nunn-Lugar program – in its current form.

US President Barack Obama indicated a willingness to negotiate with Russia on the terms of a new deal in December 2012. He is also planning to address cuts to Washington’s deployed nuclear arsenal in his State of the Union speech Tuesday.