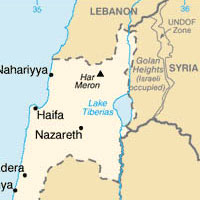 “The UN welcomes any contribution by the world community to peacemaking efforts in the Golan Heights, and the UNDOF [UN Disengagement Observer Force] is very important for the maintenance of peace in the region,” he said.

President Vladimir Putin said Thursday that Russia was ready to replace Austrian peacekeepers as part of a UN monitoring force on the border between Israeli troops and the Syrian army.

Austria had announced on Thursday morning that it was withdrawing its 377 troops from the UN’s 1,100-strong force following battles at Quneitra in Syria.

Russian peacekeepers in the area would enhance the country’s international standing and the authority of its armed forces, and have a positive impact on the situation in the region as a whole, said Valery Shnyankin, deputy head of the international relations committee at the Federation Council, the upper house of the Russian parliament.

Frants Klintsevich, deputy head of the State Duma Defense Committee, said Russian peacekeepers in the Golan Heights would be the best possible deal for both Syria and Israel, since “there is a significant level of trust [in Russia] on both sides there,” compared with peacekeepers from any other country, including the United States.

In any event, this is a “big politics” issue and it is up to the president to make the final decision, Klintsevich said.