U.S. Warns Of ‘Terrorism’ Risk During World Cup In Russia

The U.S. State Department is warning that “terrorists” may target World Cup venues in Russia, which is hosting the monthlong soccer tournament, but it did not point to any specific threat.

In a travel advisory issued late on June 15, the department urged U.S. citizens to reconsider traveling to Russia due to the threat of “terrorism” as well as “harassment and extortion” from law enforcement and other Russian officials. 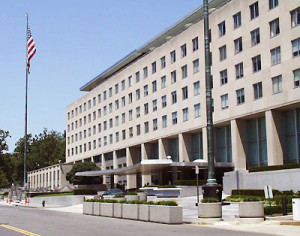 “Large-scale international events such as the World Cup present an attractive target for terrorists,” the department said.

“Although security for the World Cup will be extensive, terrorists may seek to attack event locations such as stadiums and Fan Fest viewing areas, tourist sites, transportation hubs, and other public venues,” it said.

“Travelers should expect increased police presence and enhanced security measures in and around the World Cup venues,” it said.

The Islamic State extremist group has threatened to disrupt the games in social-media postings since late last year.

Russian officials say they are prepared, and have stationed tens of thousands of security personnel in Moscow and the other 10 Russian cities that are hosting games.

Officials say they have also put Russia’s air defenses on alert during the games, which run from June 14 to July 15, and have squadrons of fighter jets standing by.

“After long years of preparations we have created a clear security plan,” FSB domestic security service deputy chief Aleksei Lavrishchev told reporters in Moscow earlier this week. “We are ready to avert and overcome any security threat.”

IS has been threatening reprisals against Russia since it intervened in 2015 on behalf of the Syrian government in its battle against IS and other Sunni rebel groups in Syria.

Militants from Russia’s North Caucasus region have also staged attacks in Russia in the past, and Russia regularly stages counterterrorism operations against suspects in its republics of Chechnya and Daghestan.

“There have been numerous successful terror attacks or thwarted plots in Russia by terrorists linked to or inspired by the Islamic State,” the U.S. Military Academy at West Point wrote in a report prepared by its antiterrorism center last month.

“This suggests the group may have the capacity to launch attacks in Russia during the World Cup.”

In view of the possibility of attacks, Moscow is requiring all soccer fans who travel to Russia to register with the police on their arrival. It has also shut some factories that process hazardous materials out of concern they might be targets, officials said.

Ben Lockwood, an underwriter at Lloyd’s of London insurance company who specializes in terrorism, told Reuters that “the perceived terrorism risk in Russia is considerably higher than Brazil,” which hosted the last World Cup in 2014.

Lloyd’s and some other London insurers are providing coverage for the World Cup’s stadiums, Reuters reported.

Lockwood said the premiums Russia is paying are about 10 percent higher than those paid by Brazil.

Some insurance companies interviewed by Reuters said they were not providing coverage for airports, railway stations, or subway lines in Russia, which they deemed to be less secure and fortified than the stadiums.

With reporting by AFP and Reuters