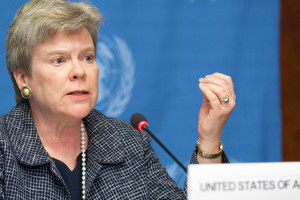 WASHINGTON. Oct 4 (Interfax) – The United States offered the Russian side to hold consultations on the methods of plutonium disposition and Russia’s rejection causes regret, the U.S. Under Secretary of State Rose Gottemoeller, who will assume the post of NATO Deputy Secretary General in a few days, said.

“We’ve been very clear that we would like to consult with the Russian side, on, for example, the method of disposition that we have in mind with regards to plutonium,” she said in an interview with Interfax.

She replied to a question, whether Washington is ready consult with Russia due to Moscow’s decision to suspend the implementation of the bilateral agreement on plutonium disposition.

“We really regret that Russia, so far, has been rejecting offers to hold consultations on this matter,” she said.

Gottemoeller recalled that the U.S. has been considering changing the plutonium disposition method, because using the MOX-fuel method Russia favors “is extremely expensive on the U.S. side.” At the same time, she said, that the agreement provides a path for the parties to consult and agree on different disposition methods.

Replying to a question as to why the U.S. did not inform Russia on its wish to change the disposition methods, she said: “We have been seeking consultation on this matter for some time. So, we have been pretty open and transparent that we would like to talk with Russia about our alternative approach.

“[We would be] very happy to provide detailed technical briefings, and we believe that we can make a convincing argument, but we haven’t yet been able to hold consultations on this matter,” she said.

“We hope we can come to an agreement. We believe that the method that we are proposing would allow us to quickly and effectively meet the goal of disposing of 34 metric tonnes of plutonium,” she added.

“Some months ago we felt it very possible to assuage the concerns that were expressed and were hopeful that we could continue to move forward with the cooperation,” she said.