The Soviet Adventures Of Steve Jobs 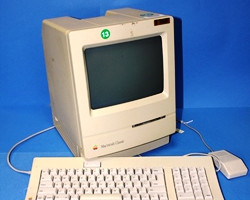 In the summer of 1985, a young commercial attache at the U.S. Embassy in Moscow sat down with two representatives of the California computer company Apple who were visiting the heart of the Soviet empire. One was an “older guy,” the attache, Mike Merin, recalls. The other was “this lanky, thin guy with this straight hair, and kind of impatient.”

The older man’s business card identified him as Apple’s general counsel, “which I figure is a big deal,” Merin tells RFE/RL. “And the other one…it doesn’t give me a title, and I don’t think anything more of it.”

The visitors, Merin says, told him of their plan to open a manufacturing facility in the Soviet Union to produce Apple computers. He says he warned them this would violate “massive numbers” of export regulations aimed at keeping sophisticated technology out of the hands of the United States’ Cold War enemy.

This did not sit well with the younger man.

“This tall lanky guy stands up and starts yelling at me: ‘Who are you? You’re just a bureaucrat! You don’t know what you’re doing!'” says Merin, who was 25 at the time. The older man, Al Eisenstat, stepped in to calm his colleague down.

Speaking on the eve of the 40th anniversary of Apple’s founding, Merin chuckles when he recalls the incident. Only after taking the two men to an exclusive Georgian restaurant that evening and talking up the South Caucasus nation’s famous meat dishes, Merin says, did it register that the younger man whose business card he’d ignored was Apple’s visionary co-founder, a renowned vegetarian.

“He says: ‘I think I’m going to get a salad,'” Merin recalls. “And then the lightbulb goes off, you know, fool that I was: ‘Oh my god, this is Steve Jobs…’ I thought [he] was this young guy who was sort of tailing along, you know, who didn’t really know how to behave with the older guy, who was the lead guy.”

Merin’s encounter with Jobs came during the tech virtuoso’s first and only visit to the Soviet Union. Since Jobs’s death in 2011 at the age of 56, a handful of fresh details have emerged about his trip to Moscow shortly after reformist leader Mikhail Gorbachev’s rise to power.

Jobs told U.S. Defense Department investigators in 1988 that during his trip to the Soviet Union he dealt with an international lawyer he felt “either worked for the CIA or the KGB.” These were among the details in a Pentagon background check — a copy of which was obtained by Wired magazine in 2012 under the Freedom of Information Act — that Jobs was subjected to for Top Secret security clearance. The name of the lawyer is redacted in the publicly released document, though it cites the Apple co-founder as saying the individual was from Paris and “helped communication between the United States and the Soviet Union.” Jobs noted, however, that he had no evidence of the man’s potential ties to intelligence.

Jobs also suspected that a television repairman who came to his Moscow hotel room “unsolicited, for no apparent reason” was spying on him, journalist Alan Deutschman writes in his 2000 biography, The Second Coming Of Steve Jobs.

Prior to arriving in Moscow for his two-day trip in early July, Jobs attended a Paris trade show, where then-U.S. Vice President George Bush encouraged him to get computers into Russia in order to “foment revolution from below,” author Walter Isaacson writes in his authorized 2011 biography, Steve Jobs. Merin confirms to RFE/RL that during their Moscow meeting, Jobs told him of this conversation with Bush, as well.

Jobs had already been stripped of major responsibilities at Apple amid the company’s flagging sales. Months later, he would resign as Apple chairman, only to return more than a decade later and launch the series of products, including the iPhone and iPad, that would revolutionize consumer electronics.

Jobs “had pitched [Bush] this idea, which was to try and get Macs throughout the Soviet Union, because if the Soviets had them, the Russian people had it, there would be the possibility of newsletters, and printing things, fomenting revolution, and, you know, all this stuff that would help the United States,” Merin tells RFE/RL.

At the time, however, Washington had restricted Apple sales of its new Macintosh computers in the Soviet Union, though the less powerful Apple II was not restricted. Isaacson quotes Jobs as telling Merin at the Georgian restaurant: “How could you suggest this violates American law when it so obviously benefits our interests?”

‘Bicycle Of The Mind’

While in Moscow, Jobs delivered a lecture to computer science students in Moscow. It’s unclear whether any full transcript of his talk exists. But in 2011, veteran computer scientist Viktor Zakharov of the Russian Academy of Sciences published a partial version of the lecture, which he attended.

The accuracy of Zakharov’s Russian-language translation of the talk is also unclear, but the broad strokes appear consistent with Jobs’s typical talking points. It includes one of his favorite spiels about computers, based on a science article about the efficiency of animal movements he had read several years earlier.

“The condor came in first place,” Zakharov quotes Jobs as saying. But a human on a bicycle also becomes remarkably efficient, the Russian scientist adds in his transcript.

To anyone familiar with the Steve Jobs canon, this is the set-up to one of the computer visionary’s favorite metaphors when discussing Apple, the company he co-founded on April 1, 1976: the computer as a “bicycle for our minds.”

While in Moscow, Isaacson writes in his biography, Jobs “insisted on talking about” Leon Trotsky, the Bolshevik leader later forced into exile as an “enemy of the people” and assassinated in Mexico on Soviet dictator Josef Stalin’s orders. Isaacson writes that a “KGB agent” who was assigned to Jobs during the trip suggested the Apple chairman “tone down his fervor.”

“You don’t want to talk about Trotsky,” the agent is quoted as saying. “Our historians have studied the situation, and we don’t believe he’s a great man anymore.”

Isaacson writes that this only made Jobs more eager to discuss the revolutionary.

“When they got to the state university in Moscow to speak to computer students, Jobs began his speech by praising Trotsky,” he writes.

If the speech in question is the same one attended by Zakharov, the computer scientist from the Russian Academy of Sciences, there is no mention of Trotsky in the partial transcript he published.

Isaacson notes that Jobs and Eisenstat, the lawyer that Merin met together with the Apple co-founder in Moscow, attended the U.S. Embassy’s Fourth Of July party during his trip.

Merin, however, recalls that Soviet authorities prevented Jobs and other U.S. executives from attending a separate celebration at the U.S. ambassador’s dacha outside Moscow.

“They wouldn’t let Americans, especially the businessmen, get out to the ambassador’s dacha. And that was kind of a big deal,” Merin tells RFE/RL.

“They were just being difficult,” he says. “It was another irritant in the relationship. It wasn’t a big deal, but it was just something else to say, you know, we can do it, and we’re going to.”