The Far East: Bridging the gap 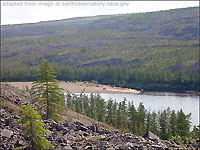 (Moscow News – themoscownews.com – Yulia Ponomareva – October 15, 2012) The recent APEC summit hosted in Vladivostok once again brought to the fore the need to develop Russia’s Far East, a region that accounts for a third of the country’s territory but only 4 percent of its population, and which is challenged by the bustling economy of its southern neighbor, China.

The government aims to take advantage of the region’s location in order to spur its economy. The Far East has every chance to become a bridge linking Asia-Pacific and European businesses if its transport infrastructure is upgraded.

In his article for The Wall Street Journal published ahead of the Vladivostok summit, President Vladimir Putin said that traffic flow between Europe and the Asian-Pacific region via Russia’s territory is expected to increase “no less than fivefold by 2020” if the government goes ahead with a set of transport modernization projects and simplifies customs and administrative procedures.

“The upside of shipment through Russia is that there are fewer borders to cross, which allows you to save on customs expenses,” said Investcafe analyst Alexei Shenk. “In addition to this, Russia offers an exhaustive set of logistics services making the shipment even cheaper.”

At present, the only railroad link connecting the Far East and the European part of Russia is the world’s longest track, Trans-Siberian Railroad, mirrored by the Baikal-Amur Mainline (BAM) in eastern Siberia and the Far East, which together handle 80 percent of the Far East’s freight traffic. Speaking at the Russian Transport forum in September 2010, then Transport Minister Igor Levitin said the capacity of the Trans-Siberian Railroad was exhausted. “The Baikal-Amur Mainline will soon hit its limit, too,” he said.

In its latest annual report, Russian Railways said that the average speed of Russia’s freight trains in 2011 fell by 9.3 percent to just 10.3 km/h, RIA Novosti reported. For comparison, in China freight trains go at a speed of up to 60 km/h. Meanwhile, next year Russian Railways is planning to raise its tariffs by 7 percent, which is seen as the only measure that could help the company avoid financial losses.

So far the draft for the federal budget, to be considered by the Duma in the first reading this Friday, envisions capitalizing Russian Railways with a total of 74.4 billion rubles ($2.4 billion) between 2013 and 2015, Itar-Tass reported.

Nevertheless, Russian Railways can find alternative sources of funding for its Trans-Siberian and BAM modernization projects. “Over the next 15 years, oil and gas fields as well as coal, uranium and diamond mines are expected to be developed in Siberia and the Far East, so there are companies to invest in transportation infrastructure out there,” said Mikhail Pak, an analyst at Aton investment group.

Mechel, a leading Russian mining holding, for instance, has already built 321 kilometers of railways connecting Russia’s largest coke field of Elga in Yakutia with BAM. The company is carrying out two more transport infrastructure projects in the region, retrofitting the port of Posyet in the Primorye territory and building the port of Vanino in the Khabarovsk territory.

Currently 28 out of Russia’s 64 sea ports are located in the Far East. According to the Economic Development Ministry, less than a third of Russia’s imports from APEC’s Asian countries come through Russia’s ports on the Pacific coast.

The government has set a target to increase freight traffic through these ports by 30 percent by 2020 and double the current figures by 2030. In 2011 they handled 125 million tons, showing a 6.1 percent growth year-on-year.

Another challenge to address is the development of motorways. It was only in 2010 that Moscow was connected to Vladivostok by a hard-surface motorway as the M-58 federal highway connecting Chita and Khabarovsk was built.