The Central Banker Who Saved the Russian Economy From the Abyss 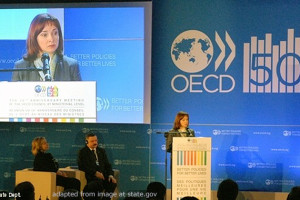 It was Dec. 16 — the day Russian traders would later christen Black Tuesday — and the ruble was in a freefall.

Governor Elvira Nabiullina watched the currency on her tablet screen react to her emergency rate increase. No, she said, not this time: Russia would no longer fight the market. Speculators needed a cold shower, she said.

That daring decision, related by two people with knowledge of the meeting, has begun to pay off for Nabiullina, 51, and her patron, President Vladimir Putin. Despite sanctions meant to punish Russia for its foray into Ukraine a year ago, the ruble has stabilized. Since Black Tuesday, when it plunged to a record low, the ruble has rebounded 19 percent against the dollar, the most among 24 emerging-market currencies.

Russia still confronts a painful recession brought on by the collapse in oil, and many of its banks are hurting. But for now, at least, the economy has stepped back from the abyss. Finance Minister Anton Siluanov last week declared the worst was over.

Inside the central bank, near Red Square, the lull passes for victory. Nabiullina no longer has to squander foreign-exchange reserves in vain attempts to prop up the ruble. Now she faces the equally daunting task of binding up the wounded economy.

While her central bank is nominally independent, analysts agree Putin is ultimately in charge. Yet Nabiullina has emerged as a power in her own right, with a direct line to the president.

Nabiullina isn’t afraid to speak up. When aides urged Putin to impose capital controls last year, she fought against the move and pushed for a freely floating ruble, according to people with knowledge of the matter. Putin heeded her advice — and then let Nabiullina sort out the details.

“It was a historic moment because she convinced Putin to accept a market solution to a problem that threatened the whole banking system,” UBS AG Russia Chairman Rair Simonyan said. Russia might well have veered into economic isolation, he said.

What Nabiullina came up with turned out to be one of the biggest financial gambles of Putin’s 15-year rule. First she raised interest rates to punishingly high levels, lifting the benchmark rate to 17 percent from 10.5 percent in one stroke. Then she stepped back from intervening on the currency market.

Putin regularly uses a hotline to the central bank to talk strategy with Nabiullina, a former economy minister and presidential adviser who became governor in 2013. When the dedicated phone on her desk rings, everyone else leaves the room, the people said.

“He can’t interfere in the day-to-day business of the central bank,” said Dmitry Peskov, Putin’s spokesman. “He doesn’t have that right.”

With oil prices holding steady since January and the threat of further sanctions on hold, Nabiullina can now attend to the first recession in six years. Emboldened by Putin’s support, she surprised analysts by reducing the benchmark rate to 15 percent in late January, followed with a cut to 14 percent this month.

“The negative peak is behind us,” Siluanov said March 19.

“All banks are in great difficulty, including us,” Gref told reporters in Moscow on March 20. Nor is the economic picture bright: Russia is on track for the biggest drop in consumer spending in six years and inflation is running at 16.7 percent, the fastest since 2002. All of this has the central bank predicting the economy may shrink as much as 4 percent this year.

Nabiullina, for her part, has learned the art of bureaucratic survival from Putin. After the president publicly scolded the central bank for moving too slowly last year, she replaced her head of monetary policy, Ksenia Yudaeva, bringing back Dmitry Tulin, a seasoned regulator, to the central bank. The move was applauded by many economists and let Nabiullina retain Yudaeva, a trusted ally, as head of forecasting and strategy.

Not everyone gives the central bank high marks. Pavel Trunin, who runs the monetary-policy department at the Gaidar Institute in Moscow, said Nabiullina spent most of 2014 reacting to the markets rather than getting ahead of them. While letting the ruble float freely will cushion the impact of oil-price swings on the economy, the move came too late to avert a “market panic,” he said.

Perceptions of Nabiullina’s handling of the crisis are improving, according to a Bloomberg survey of 29 economists. Thirty-one percent said they have a better opinion of the monetary authority now than six months ago, while 21 percent said their view has worsened. In the same poll, 19 respondents gave the regulator a positive rating when asked to assess its role in the Russian economy, with eight neutral marks and two negative assessments.

Russia is getting better news on other fronts. The central bank said Thursday that its international reserves had their biggest weekly increase since last July, jumping by $1.2 billion to $352.9 billion in the seven days through March 20.

Still, few in banking had to deal with geopolitics like Nabiullina, the first woman to lead a Group of Eight central bank. As Putin moved to annex Crimea, for instance, she began monitoring social media to gauge investor expectations about the ruble.

Neither Nabiullina nor Putin was prepared for the collapse in oil that upended the economy. Through it all, however, the president has stood behind her.

“One can pick on Nabiullina, but one shouldn’t forget that in general her policies are adequate,” Putin said after the December rate increase. “The central bank isn’t the only one responsible for the economic situation in the country.”