Social networks should not be allowed to be used to damage U.S., Russia – McFaul 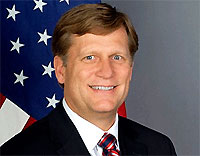 MOSCOW. March 11 (Interfax) – The United States and Russia share the opinion that common rules of guaranteeing cyber security must be worked out, U.S. ambassador to Russia Michael McFaul said in an interview published by Kommersant.Vesti magazine on Monday.

However, there is one moment on which our points of view coincide with the Russian authorities. The issue is cyber security, he said. It should not be allowed that social networks would be used for cyber attacks or damaging the security and infrastructure of the two countries. We would want to agree on certain rules in this sphere with our partners, including Russia, he said.

He said he uses Twitter primarily to spread information about the position of the administration of the U.S. president on certain issues and on its policies and also to tell people about America in general.

Besides, Twitter permits prompt response to developments and making the necessary information known to a broad circle of people and the media.

He said he uses Twitter mainly from home which has its own benefits – his online diplomacy doesn’t take time from offline diplomacy. He said he tries to discipline himself – he doesn’t want to sit in the office all day and read what is written in social networks, otherwise he will simply not have time to meet people which would be a mistake.

McFaul said that the main advantage of Twitter is that it gives an opportunity to directly contact Arkady Dvorkovich as well as some hypothetical Ivan Ivanovich in Novosibirsk.

I try to ignore trolls – people who want only to provoke and be rude. I even ban some of them – for me it’s better not to know what they write about me, otherwise I will want to answer, McFaul said. But on the whole it is important to me that people would know that I pay attention to their comments to my postings and that I always try to answer, he said.

The ambassador apologized for calling Russia a wild country some time ago.