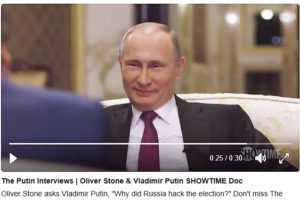 “The State Secretary of the Russian Federal Bar and lawyer of Ksenia Sobchak, Konstantin Dobrynin, has filed a complaint with the CEC over Channel One’s breach of the electoral regulations. The Putin documentary filmed by director Oliver Stone is being shown on federal television between February 12 and 15. The total airtime is four-and-a-half hours,” a statement posted on Sobchak’s website on Tuesday said.

Channel One is violating Russia’s election legislation because the Stone film goes beyond Putin’s professional activity and can be seen as campaign material, the statement said.

Furthermore, the film is being aired before the official beginning of the campaign, it said.

“It is possible that the television channel’s employees are committing an administrative offense under Article 5.5 of the Russian Code of Administrative Offenses,” Sobchak’s legal team said.

The Yabloko party shares the opinion.

“The airing of this film carries signs of illegal media campaigning in favor of registered presidential candidate Vladimir Putin: it violates Articles 49, 50, 51, and 52 of the Federal Law on the Election of the Russian President,” Slabunova said in her message to the CEC, which was published by the party’s press service. “The production and airing of this media campaign material was not financed by Putin’s election fund, and the film’s airing was planned before the media was permitted to start campaigning,” Slabunova said.

Presidential press secretary Dmitry Peskov said on Tuesday that he had no right to interfere in the editorial policy of television channels in connection with the airing of Oliver Stone’s film about Putin.

“We have absolutely no right to interfere in the editorial policy of television channels in any way. We do not do that,” Peskov said.

“With regard to election issues, I would recommend referring them to the Russian CEC,” he said.