(Bloomberg – bloomberg.com – Isis Almeida – December 4, 2014) Ukraine’s plan to diminish its energy dependence on Russia is adrift in the Bosporus Strait.

The nation, which gets half its gas from Russia, wants to build a liquefied natural gas terminal on the Black Sea and held talks with Cheniere Energy Inc. (LNG) to import U.S. cargoes. The only path to the terminal is through Istanbul’s 17-mile waterway. 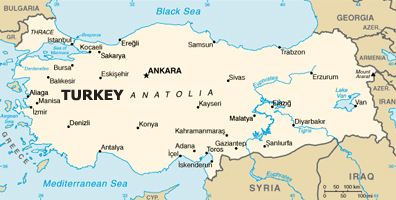 Turkey doesn’t allow LNG shipments through the Bosporus because of safety concerns and congestion. The strait is about half a mile wide at its narrowest point and classified as a maritime chokepoint, among the most difficult to navigate.

“If Turkey were to agree to LNG ships transiting the Bosporus to deliver fuel to Ukraine, other states in the Black Sea would also want to invest in their own terminals,” Michelle Berman, the head of shipping and freight research at Business Monitor International in London, wrote in an e-mail Nov. 27. “This would lead to a considerable ramp up in the volume of traffic passing through the already congested Bosporus.”

Ukraine’s LNG plans may be further complicated by Russia’s decision this week to scrap its $45 billion South Stream gas pipeline to Europe, favoring instead a Black Sea link to Turkey. Strengthening ties between Russia and Turkey may make it even less likely that the government in Ankara would open up the Bosporus to LNG tankers. Russia already supplies 59 percent of Turkey’s gas.

Russia provides about 30 percent of Europe’s energy, half of which travels through pipelines crossing Ukraine, making it a linchpin in the region’s energy security. Four Republican Senators introduced the North Atlantic Security Act in July, requiring the U.S. Energy Department to approve applications to export LNG to Ukraine, Japan and NATO nations.

Ukraine will proceed with its LNG terminal plan even as companies say they can’t guarantee that ships will be allowed through the Bosporus, Energy Minister Yuri Prodan told reporters in Kiev on Nov. 19. A facility can be ready by the end of 2015, Sergiy Yevtushenko, the head of Ukraine’s investment agency, said in April.

Floating storage and regasification units of the type Ukraine is considering are generally cheaper than land-based import terminals. The Independence, a regas ship leased to Lithuania last month, cost about $330 million to deliver, according to owner Hoegh LNG Holdings Ltd., while Poland expects to spend about $700 million on a land-based terminal being built.

Turkey “does not view positively” an LNG terminal in the Black Sea, Energy Minister Taner Yildiz said in June. That position hasn’t changed and Turkey doesn’t want more congestion on the Bosporus, a spokesman for the ministry said Nov. 14, asking not to be identified by name because of policy.

Traffic through the Turkish straits is regulated by a 1936 convention which guarantees free passage of merchant vessels in times of peace. Turkey introduced laws in 1994 that give it legal powers over vessel movements and what type of ships can use the Bosporus.

“It’s entirely at Turkey’s discretion if they decide, or are persuaded by others to decide, that LNG tankers should pass through the Bosporus on the basis of those regulations,” Nick Austin, a marine and international trade partner at Clyde & Co., the world’s biggest shipping law firm, said by phone Nov. 4.

Transits through the Bosporus and the Dardanelles, which link Turkey to the Aegean Sea, reached 2.9 million barrels a day of crude and oil products last year, from 2.6 million in 2006, according to the U.S. Energy Information Administration.

“We are already having huge problems with the oil tankers,” Fatih Baltaci, president of Istanbul-based Akfel Holding AS, a closely held Turkish gas importer, said in an Oct. 22 interview in Amsterdam. “I don’t see it as feasible or viable,” he said of Ukraine’s plan.

Turkey plans a canal parallel to the Bosporus that will divert traffic away from the strait and connect the Black Sea to the Marmara Sea via a route running west of Istanbul. The nation’s ruling party expects to finish the plans in 2014 and complete the project in the next five years, it said on its website.

While Turkey and Ukraine may eventually seek to use the canal for LNG, this wouldn’t provide a solution “in the short or medium term,” Anthony Skinner, head of Europe, the Middle East and Africa at risk-advisory firm Maplecroft in Bath, England, said by e-mail Oct. 28.

Economics may scuttle Ukraine’s project anyway. The Ukrainian hryvnia weakened more than 13 percent against the dollar last month, the worst performer among more than 170 currencies tracked by Bloomberg. The nation’s economy will contract 7 percent this year, Prime Minister Arseniy Yatsenyuk said Nov. 18. The conflict over Crimea, which Russia annexed in March, has claimed more than 4,300 lives.

“This is a state in complete chaos, with no money and it’s talking about building exotic gas infrastructure which it basically doesn’t need,”Jonathan Stern, a senior research fellow at the Oxford Institute for Energy Studies, said by phone Nov. 28.

Turkey allows liquefied-petroleum-gas vessels, which are usually smaller than those carrying LNG, to sail through the Bosporus. It also lets LNG tankers through the Dardanelles Strait to its own import terminal in the Sea of Marmara.

“Lots of LPG goes through the Bosporus, which is a lot more dangerous than LNG,” Jason Bennett, a partner at Baker Botts LLP, a law firm negotiating about $500 billion in LNG sales agreements, said in a Nov. 19 interview in Paris. “An LNG terminal in the Black Sea makes economic sense.”