Russia’s economy is doing better than expected but it still faces dangers and “crisis phenomena”, the head of the Central Bank said on 4 June, acknowledging the impact of “external factors”. 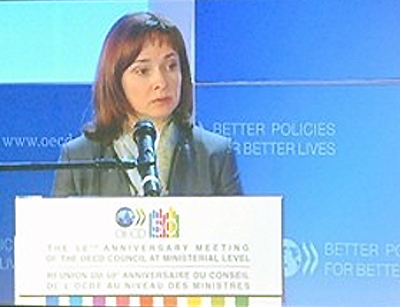 “Current figures for the economy have proven better than economists expected but it is early to say that all the crisis phenomena have passed,” Elvira Nabiullina told a banking conference, as reported by Interfax news agency. “The risks have softened but they are the same and we have to be aware of them.”

She identified those risks as long-term structural limitations within the economy, which have been joined by “cyclical recessionary factors caused by acute changes in the external environment”.

The financial system and balance of payments have adapted to the “new conditions” but that does not apply to the economy as a whole, Nabiullina said. “External factors remain fairly unfavourable. Oil prices have gone up but even if they settle as the current level they will be one-third lower than the average for the past five years,” she told the conference. “On top of that, prices for other traditional Russian export products are going down.”

It will take time to adapt the economy to the new conditions and restore sustainable growth, and this “will depend on the external environment changing but more than that on the rate of structural reform”, she said. The positive scenario would be larger processing and service sectors with higher productivity, while the negative scenario would be the oil price stabilizing and the economy retaining its old structure with low productivity and growth of 1 to 2 per cent.

“Both scenarios are possible,” she said, but the Central Bank will use its monetary-policy and regulatory powers to encourage the positive one.