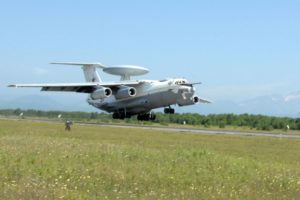 South Korean fighter jets fired over 300 warning shots at a Russian Air Force A-50 Mainstay Airborne Early Warning aircraft on July 23 after the Russian plane twice violated South Korea’s airspace above the East Sea, according to South Korean authorities cited by The Aviationist. Earlier that day, Russian and Chinese bombers had conducted their first long-range joint air patrol in the Asia-Pacific. Russia’s Defense Ministry said there had been “no violations of airspaces of foreign countries” in its joint patrol with China, according to the New York Times, and Russian diplomats in

Seoul reportedly complained of inaccuracies in the official comments from South Korea.

In considering the incident, it’s important to note, as The Aviationist points out, that “there’s a significant difference between territorial sky,” otherwise known as a nation’s sovereign airspace, and air defense identification zones, or ADIZs, which “are not defined in any international law” but determined by countries as “an airspace … where identification, location and control of aircraft over land or water is required in the interest of national security.” The New York Times reported that in 2013, two weeks after China unilaterally expanded its air patrol zone to disputed territory, South Korea expanded its ADIZ “for the first time in 62 years to include airspace over the East China Sea that is also claimed by China and Japan. Since that expansion, the air defense zones of all three countries have overlapped.” (Japan said it had also scrambled jets in response to the Sino-Russian patrol and had lodged formal complaints against both Moscow and Seoul, the New York Times story said.) Russia’s Defense Ministry, according to Reuters, said it did not recognize South Korea’s ADIZ, while “the Chinese Foreign Ministry said the area [in question] was not territorial airspace and that all countries enjoyed freedom of movement in it”; the Pentagon, meanwhile, said it supported South Korea’s and Japan’s responses.

Russia Matters asked some members of the Belfer Center’s Russia team for their take on the developments.

This is further evidence that thinking is needed on how to (a) broaden the Incidents at Sea and Dangerous Military Activities-type agreements beyond the U.S. and Russia and (b) make them actually function properly.

For me the significant point is the joint air patrol. (Yes, a shoot-down could trigger a series of events ending in open conflict, but it is not likely given previous examples like Turkey’s shoot-down.) I have been watching for signs of a “Pacific region security initiative,” which is called for in the 2014 Russian military doctrine. The way Chinese troops were included in the Vostok 2018 mass exercise, together with these joint patrols and other efforts, indicates that Russia and China are creating some ability to work jointly militarily in the Pacific. I want to know if their relationship will look like NATO (which Russia has publicly ruled out) or like U.S.-Canada or some other association.

In the 2014 doctrine, Russia claims it won’t create a formal military alliance in the Pacific. But whatever it is called, there is something being created.

Additionally, I am not sure the news accurately tells us where the planes were. If the firing occurred in or very near territorial airspace, it would be similar to the Turkey shoot-down. But if it occurred way out in ADIZ, then the South Korean military acted dangerously (perhaps illegally) in firing.

We can all recall the Soviet shoot-down of a Korean airliner in 1983. That was a mistake and Russia uncharacteristically gave a public briefing to explain its side of events. The Soviets also forced a Korean airliner to land on a frozen lake in the west near Murmansk in 1978. The airliner had strayed into Soviet airspace. That caused a death and injuries.

I’m wondering why Russia and China would do joint air patrols near a third country’s airspace. Militaries do joint operations to practice so they can do them more often and better. Perhaps they’re going to increase patrols and want to get better at avoiding incidents. I doubt that they’re going to share patrol responsibility over their own air space. If people like Alexander Golts are right, then Russian senior military still want a military force capable of fighting a major adversary (i.e., more than just a local conflict). Russia can’t do that for the foreseeable future by itself. China may have made the same assessment. I think they are building a joint capability that will exist without any formal treaty or commitment-just an understanding that the joint capability may be needed in the future. It could backfire on Russia if China decides to flex its muscles in Russia’s Far East. That kind of thinking backfired on Russia in 1941.

The joint patrol was a message that Russia and China intend to be mutually supportive on Northeast Asia security issues (and perhaps more broadly). It’s political, not practice. Of course, whether or not that can last is an open question. China wants to assemble some help against the United States, Japan and South Korea. Russia needs any friend it can get. Not surprisingly, they picked what they thought was the weakest link (which turned out not to be so weak).

Article also appeared at russiamatters.org/blog/russian-plane-draws-shots-south-korea-first-air-patrol-china-belfer-experts-weigh, with different images, bearing the notice: “© Russia Matters 2018 … This project has been made possible with support from Carnegie Corporation of New York,” with a footer heading entitled “Republication Guidelines” linking to: russiamatters.org/node/7406, which bears the notice, in part: