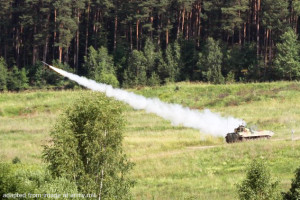 The Russian military is failing to meet its plans for this year on re-equipping its armed forces with modernized weapons because of Western sanctions over the conflict in Ukraine and a decline of domestic industries, a deputy defense minister told President Vladimir Putin.

Government defense contracts that have fallen behind schedule include production of Navy guard ships, Beriyev Be-200 amphibious aircraft, Vikhr anti-tank missiles, remote control and radio monitoring equipment for Igla surface-to-air missiles, and weapon launch systems for Tupolev-160 strategic bomber planes, Deputy Defense Minister Yuri Borisov told the president during a video conference, according to a transcript released by the Kremlin on Thursday.

“The objective reasons for the failure to meet state defense procurement orders include restrictions on the supply of imported parts and materials in connection with sanctions, discontinuation of production and the loss of an array of technologies, insufficient production facilities,” Borisov said.

But he maintained that Russia’s defense industries were adjusting to the setbacks, and that so far, 38 percent of the government’s defense purchases planned for this year have been completed.

“On the whole, one could say that an absolute majority of enterprises have acquired the necessary production pace, are fulfilling their obligations to the Defense Ministry,” Borisov said.

Defense industries had been the focus of the Soviet economy, and as the Russian economy has taken a downturn amid Western sanctions, Putin said that work on military contracts was key to economic and technological development, and to providing employment.

“I will especially emphasize that those who are delaying production and supplies of military technologies, who are letting down related industries, must within a short term … correct the situation,” Putin said.

“And if that does not happen, the appropriate conclusions need to be made, including, if necessary, technological, organizational and personnel [changes],” he said.

Reshaping the Russian military into a modern, effective force has been one of Putin’s most ambitious projects, and one that has seen some successes.

The government was planning to spend an estimated 20 trillion rubles ($351 billion at the current rate) on a military re-equipment program that was designed to run from 2011 to 2020, with nearly 80 percent of the funds intended for hi-tech weapons, according to figures cited by the Lenta.ru news portal earlier this year.

Putin proclaimed during his marathon call-in show this spring that despite some setbacks, “without a doubt, this program will be fulfilled.”

“Our goal is to make sure that by that time, by 2020, the amount of new weapons and military technologies in our armed forces reached no less than 70 percent,” he said.

The share of modern weapons currently in service in the Russian military ranges, depending on the branch of the armed forces, from 30.5 percent to nearly 78 percent, according to military figures Putin quoted during this week’s video conference.