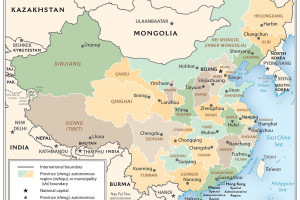 Russian movies, which have struggled to gain a footing abroad since the fall of the Soviet Union, are now breaking into the world’s second-largest box office just across the border in China.

In 2013, the big-budget war film “Stalingrad” became the first Russian movie to get a wide release in China, earning $8.3 million in its first four days in theaters, according to the BBC news agency’s Russian-language service. “Stalingrad” also became Russia’s highest-grossing movie of all time, earning $51 million in Russia, according to film website Kinopoisk.

Russian film’s momentum has grown since then: China bought a total of 11 Russian films at the Marche du Film in Cannes last month, more than any other country, and the animated film “The Snow Queen” will become the first Russian cartoon to go into wide release in China when it premieres there on July 31.

China stands to offer Russian films a vast audience and soaring revenues. The Chinese box office surged by 34 percent to $4.8 billion last year, driving growth in the international market, according to the Motion Picture Association of America, a U.S. film trade association.

It also offers an immense network of movie theaters, boasting 20,000 movie screens across the country to Russia’s 3,780, according to Alexander Luzhin, CEO of market analysis firm Movie Research.

Russian film professionals hope that the burgeoning political ties between the two countries will help revive Russian movies’ popularity in China, which reached a peak during the Soviet era only to plummet when the industry fell apart following the dissolution of the Soviet Union.

Russia’s political and business ties with China have thrived over the last year as Russia seeks to strengthen its position globally amid a political standoff with the U.S. and EU over its role in the Ukraine crisis.

Russian films’ growing presence in China comes at a critical moment for the industry, which is desperately seeking to expand its source of revenues.

“The increasing quality of Russian films requires larger production budgets, and international sales in this case are an important and promising source of funding,” said Anton Malyshev, head of the Russian Cinema Fund, the state body that supports the Russian film industry.

“Stalingrad” was released on 7,000 movie screens in China, according to Luzhin – in other words, two times more than the total number of screens in Russia.

The film’s success came largely thanks to its high-quality visual effects and modern approach to historical drama, which helped attract the young viewers that make up the majority of Chinese moviegoers, Luzhin said.

The feat of “Stalingrad” still pales in comparison to the box office earnings that U.S. films have achieved in China. The Hollywood blockbuster “Furious 7” grossed $250 million in the first week of its Chinese release alone, making up a quarter of the world box office, the Vedomosti newspaper reported in April, citing Yekaterina Mtsituridze, head of Russia’s Federal Agency on Culture and Cinematography.

The runaway success of “Furious 7” in China demonstrates the heated competition that Russia faces in this coveted market – not only from foreign films, but from the country’s own well-developed industry.

A Chinese film of average quality brings in $50 million to $60 million in its domestic release, which is substantially more than “Stalingrad” earned in China, Nazarova said.

Competition among foreign films is brought to a fever pitch by a government quota that allows only 34 foreign films into the Chinese market each year.

“We are negotiating now with our Chinese partners on a quota for Russian films in China,” news agency RIA Novosti quoted Volin as saying.

As Russia and China boost their diplomatic ties, Russian and Chinese film companies too are stepping into co-productions that could become a vital source of investment for the Russian film industry.

A number of joint products are currently under development, including the fantasy adventure “Journey to China 3-D,” the third installment in “The Snow Queen” franchise and the animated comedy “Quackerz 3-D,” according to data from the Russian Cinema Fund

“Quackerz 3-D,” which will be released in China next year, was the first Russian project to get considerable Chinese investment, said Alexandra Modestova, who heads the organization Russian Cinema, which promotes Russian films around the world.

This investment was an “unprecedented event” for the Russian film industry, Modestova said. But it is still too early to speak of huge revenues for Russian films in China, she added.

Nonetheless, both Russian producers and the government are setting their sights on the gold mine across the eastern border.

“We do not expect revenues of $300 million [from China] yet, but we should aim to hit the $100 million mark,” Deputy Communications Minister Volin said in April, according to a government statement.