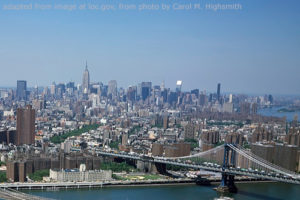 NEW YORK – U.S. President Donald Trump begrudgingly signed off on the latest round of sanctions against Russia early in August to the sound of growing hostility.

In Russia, Prime Minister Dmitry Medvedev slammed the new sanctions, saying Washington had launched “a full-fledged economic war on Russia.” “It ends hopes for improving our relations with the new U.S. administration,” he wrote on Facebook.

But if hostilities have ratcheted up between the global rivals, it has not unsettled Russian emigres living in New York, who say they are largely unaffected by the geopolitical tit-for-tat.

In Brighton Beach, the Brooklyn neighborhood known as “Little Odessa” for its Russian-speaking population and seafront reminiscent of the Ukrainian port town, Russians brushed off suggestions that Americans were at all hostile towards them.

“I’ve never felt any discrimination here,” said Izya Nemerovsky, sitting on a boardwalk bench facing the water. Now 78, Nemerovsky emigrated from Odessa in 1988. “Every American has always treated me fine,” he said.

“I’ve been here for 22 years,” Boris, who declined to give his last name, said from an adjacent bench. “No one has ever treated me or anyone I know badly because we are Russian. Not now, and not earlier.”

Tanya Pilich, a 53-year-old home attendant, said that U.S.-Russia relations are always changing and that this has never troubled her or any Russian she knows living in the United States.

“All that has never affected us,” she said. “We regular people have other things to worry about than politics.”

Brighton Beach’s aging population moved to the United States in the 80s and 90s says Sam Kliger, head of the Russian division of the American Jewish Committee. They are settled here, he says, and many support the country’s new leadership – Trump earned 84 percent of the Republican vote in Brighton Beach in the April 2016 primary.

Besides a wave of stereotyping Russians as mafia-types in the 90s, Kliger says any anti-Russian sentiment that existed in New York has long since dissipated.

Leonid Martinyuk, a Russian opposition activist who came to the United States in October 2014 and recently received political asylum, believes that the cyber hacking allegations are unlikely to make Americans hostile towards ordinary Russians in the United States.

“It’s a hacking group that’s attacking America from a distance in Russia, not an army that’s here,” he said in a phone interview. “People can’t put a face to a hacking group.”

[The Russians Are Coming: How NYC Came to Obsess Over Moscow (Op-ed)]
Garry Kasparov, the Russian chess grandmaster turned political activist who lives in New York, offered another reason: Americans generally distinguish between the Kremlin and the Russian population-at-large.

“I don’t think that Americans have a different opinion of Russians now, but of Vladimir Putin,” Kasparov wrote in an email to The Moscow Times. “And this is a vital distinction.”

While Russians living in the U.S. may not have felt a change in the temperature, some are upset by the coverage their homeland has been receiving in the American media.

“All that has never affected us. We regular people have other things to worry about than politics.”

Tatiana and Alexander Zavgorodny, 68 and 69, moved to Brighton Beach from Moscow two years ago, and say they are saddened by the way their native country has been portrayed by the news media.

“[American news organizations] don’t have another way to answer for their misfortune,” Alexander said, referring to the surprise election of U.S. President Trump last year. “So they blame everything on Russia.”

Olga Khvostunova, a political analyst and researcher at the U.S.-based Institute of Modern Russia, moved to the United States seven years ago. She, too, finds the U.S. media’s coverage of Russia disturbing.

“I had higher expectations of the American media,” she said in a phone interview. “I’m not sure what the point is in demonizing Russia as a country here in the U.S.”

To combat possible negativity against Russians living in the United States, Khvostunova says her Institute makes a clear distinction between the Kremlin and the rest of Russia.

Still, Khvostunova says that, other than “news junkies,” many people don’t follow U.S.-Russia relations that closely and their hostility has little effect on people’s day-to-day lives.

“The only way the Russian emigres I know stand out from other people is that they’re even more anti-Putin – and I don’t think they’re acting like this to deflect suspicion,” Sestanovich wrote in an email to The Moscow Times.