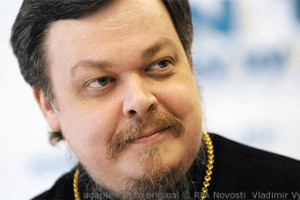 There should be a “rotation of elites” in Russia and young people should come to power, Russian Orthodox Church spokesman Vsevolod Chaplin has said. He was speaking at a meeting with participants in the II International Interfaith Youth Forum in Izberbash (Dagestan), privately-owned Russian news agency Interfax reported on 4 August.

“Today we need a certain rotation of elites,” he was quoted as saying. “Young people should replace those who have embezzled, those whose property, souls and hearts are somewhere outside the country, who look pessimistically at the future of Russia, saying: ‘Well, what can we do? Some who are no friends of ours have both more money and maybe more weapons, and greater intellectual and media influence,'” Chaplin said.

He went on to say that sometimes such people say “we don’t have to do anything but just abandon ourselves to the trends and directives formed beyond our country’s borders”.

“People who speak like that should leave, and those like you with bright eyes should replace the older, overseas-oriented elites who have embezzled, who have come to terms with talk that Russia should be a community of indifferent, selfish people,” Chaplin said.

He said that it was very important that today young people ensure that Russia has a new breakthrough in the informational, intellectual, geopolitical and economic spheres.

Russia very much needs a moral economy as an alternative to the modern global economy, Chaplin said.

“We need a new Russian, Dagestani, Caucasian breakthrough – a breakthrough in a mission that would help Russia change the world,” he said.