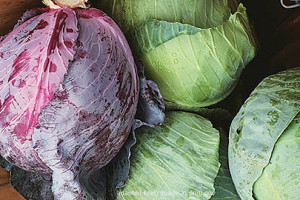 The cost of a cabbage in Russia has almost tripled in less than six months.

The Russian staple – and a key ingredient in traditional dishes such as the famous shchi soup – leads the field among foods suffering from inflation because of huge ruble devaluation in 2014 and a Kremlin ban on food imports from the United States and European Union.

Cabbages now cost over 40 rubles (80 cents) a kilogram in most stores. Some stores have marked up the vegetable as much as 400 percent, according to analysts.

“The further from the harvest season the more expensive they become,” said Irina Kozy, the head of industry news agency FruitNews. “This year the price is much higher.”

Inflation, currently running at its highest rate in over a decade, has provoked some social discontent, undermining the rising living standards that have been a hallmark of President Vladimir Putin’s 15-year rule.

Cabbages, along with other staples like beets and potatoes, are historically central to the diet of Slavic people. Some claim the importance of cabbages for Russians is reflected in etymology: the Russian word for cabbage, according to some sources, comes from the Latin word for “head.”

Despite the importance of cabbage for the Russian diet, experts said that Russia only produces 75 percent of the cabbages it consumes. The market shifts to imports after New Year – mainly from the EU – when winter means domestic supplies fall. Cabbages can only be stored for about four months before they spoil.

The seasonal price rise this year has been exacerbated by early frosts that reduced domestic harvests in November and the Kremlin’s ban of EU food imports in August – a retaliatory move against Western sanctions over the Ukraine crisis. Cabbage price inflation has also been sped up by the fall of the ruble, which has dropped over 30 percent against the U.S. dollar since the start of 2014.

Cabbage prices have increased 166 percent since early October, according to data from Russia’s State Statistics Service.

Wholesale cabbage prices rose 66 percent in the first three months of this year, according to figures from the Agriculture Ministry.

The cost hike is even bigger in some stores.

The bulk of Russia’s imported cabbages came from the EU, particularly Poland. Russia has in the past been the top consumer of EU cabbages overall – 74 percent of the EU’s 2013 exports of white cabbage went to Russia, according to data compiled by the Bloomberg news agency.

With this link now formally severed by the food embargo, Russian retailers have been scrambling to find alternative suppliers, mainly in North Africa.

But some Russian cabbage market insiders told The Moscow Times that old supply chains from Ukraine and Poland were still intact, having simply been illegally rerouted via Belarus and the Russian-controlled Black Sea region of Crimea.

“All suggestions about a new Iron Curtain descending are nonsense, we receive the same goods, just through former Soviet countries,” said Pavel Grudinin, head of the Lenin Collective Farm that operates in the Moscow region and produces 3,000 tons of cabbage annually.

“Ukraine exports cabbages through Crimea, but it is an expensive pleasure,” he said.

While cabbage prices have led the way, prices for other vegetables have also risen steeply. Potatoes and beets have been less hit because they keep for longer and domestic production is greater – but the cost of onions and carrots has been shooting up.

“Cabbage, carrots and onions are getting more expensive at the fastest pace,” according to Tatyana Getman, the head of fruit and vegetable market consultancy firm APK-Inform.

Carrots have increased in price by 78 percent since the beginning of October and onions have jumped 85 percent, according to the State Statistics Service.

Russian officials, as well as experts, predict that the inflation rate is likely to fall back in the coming months.

If the weather conditions are favorable and the harvest is good, domestic production will soon remove the pressure on food prices, according to Natalya Kolupayeva, an equity research analyst at Raiffeisenbank in Moscow.

“If the exchange rate remains stable, and doesn’t weaken noticeably, it will be possible to say that the peak of price inflation for food has passed,” she said in written comments.