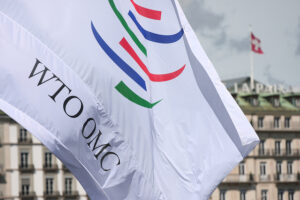 MOSCOW. June 29 (Interfax) – World Trade Organization rules have to adapt to new realities, both in the context of climate change and burgeoning ecommerce, but those changes must not undermine the WTO’s fundamental values and lead to groundless trade restrictions, Maxim Reshetnikov, the Russian economic development minister, said at a meeting of the World Economic Forum’s Trade and Investment Leadership Group.

He gave the prospects that are being discussed at the WTO for changing the rules in the context of the campaign against climate change as an example.

“It must not be forgotten that the whole point of the WTO is to liberalize trade. That must not change. Any of the WTO’s new ‘green’ rules would have to comply with underlying agreement reached under the United Nations Framework Convention on Climate Change and Paris and not lead to unjustified trade restrictions,” an Economic Development Ministry press release quoted Reshetnikov as saying.

E-commerce is another good example of where WTO rules have to adapt to new realities. This has grown during the pandemic, which has sped up the digital transformation of everyday and business communications, and this in turn has resulted in an increase in risks that have to be dealt with to protect users from new illicit practices, Reshetnikov said.

He said increased protectionism, including that veiled as well-intended protectionism, for example the fight against climate change, trade disputes and discriminatory practices, will simply delay the post-pandemic recovery. “We have to fight such practices,” Reshetnikov said.

Reshetnikov also said that that at the 12th WTO Ministerial Conference that takes place in Geneva from November 29-December 3, 2021. It would be necessary to decide on future areas of work, and start a discussion on competitive distortions.

“We include competitive distortions among these. Some believe the reasons for such distortions lie in certain forms of state subsidies, even if that support is not governed by the WTO’s existing rules. Others think they lie in the provision of various non-market preferences to transnational companies, which are gradually grabbing functions that used to be the sole remit of states and of international governmental organizations. WTO rules need to be updated to meet that challenge but sequentially, starting with a discussion of the scope of the concept itself,” he said.

Russia is suggesting a special working group on WTO reform be set up according to the country’s proposals for the 12th WTO Ministerial Conference. “The establishment of a WTO Working Group on the WTO reform is required. The group shall be vested with the authority to discuss issues of relevance to the WTO reform with a focus on improvements of the negotiating, monitoring and dispute settlement functions of the WTO, as well as institutional improvements in its functioning,” say the proposals, posted on the WTO website last week.

“The group will discuss these matters in an open, transparent and inclusive manner striving for multilateral outcomes, including with a view to establish formal WTO 2030 Vision by the next [13th] MC,” the proposals say. This could be reflected in a Joint Ministerial Statement on the WTO reform.

“Collective efforts are needed to demonstrate the continued relevance of the WTO for the international trade, its ability to respond efficiently and promptly to the pressing challenges faced by international trade and investment, which have been especially exacerbated by the global pandemic,” the proposals say.

Restoration of the full operation of the dispute settlement system is needed. “Members urgently need to launch substantive discussions aimed to improve the WTO dispute settlement system, including through addressing Members’ existing concerns about certain adjudicative approaches and specific rulings, while preserving the essential features of a two-tier adjudication process,” the proposals say.

“WTO rules relevant for elimination of competitive distortions in international trade should be further developed or reinforced in order to meet modern realities, trends and practices,” Russia believes.

“Discussions aimed at identification and forthcoming elimination of such distortions, including industrial and agricultural subsidies, on activities of state owned and transnational enterprises, barriers in access to technology and exemptions from trade rules, should be launched,” it says.