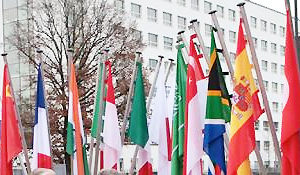 MOSCOW. Nov 22 (Interfax) – The G20 summit will discuss ways to modernize the World Trade Organization (WTO) as one of the key issues at their summit and, hopefully, find a common approach to the matter, Russia’s G20 Sherpa Svetlana Lukash said.

“As for trade, the key question of course is: what is going to happen to the main international trade system, i.e. the WTO? Currently, it is not in quite a working condition, the WTO’s main working institutions are not performing their functions or, at least, if they are, they do so inefficiently,” Lukash said at a briefing in Moscow on Thursday.

“Currently each country has its own view on this problem. A while ago, the European Union came up with detailed proposals on how this should be done. We believe that first of all it is necessary to decide on approaches to this issue, because dealing with such basic foundations of our development unilaterally and in a behind-the-scenes manner is unacceptable. We hope that is precisely the issue the leaders will discuss at the summit in Buenos Aires and think up how to move forward,” Lukash said.

Thus, the group is agreed on the need to modernize the Two and bring it in line with modern-day realities, she said.

“Very many issues remain unregulated. Investments, e-commerce are not regulated by the WTO rules. In other words, everything that currently makes up the base of economy and develops under other trade agreements and in the framework of regional trade blocs, alliances, and is being successfully implemented – all this still remains outside the WTO, which of course is not helping strengthen its authority. All countries practically understand that the WTO must remain at the center of international trade regulation, that there have to be universal rules for all, same legal field, same rules of the game,” Lukash said.

“The president certainly sees as one of the priorities the same issues that were raised by the Argentine presidency: developing the digital economy and international trade issues. We hope to take active part in the discussion and outline further near-term steps for the G20, and by the time of next summit, maybe come up with some proposals that the G20 will be able to work out in this sphere and continue international cooperation by confirming that the G20 group knows how to agree on [issues] and is after all the leading economic forum in the true structure of global institutions,” Lukash said.

The WTO is due to be discussed during the summit’s second session focusing on key economic issues, including trade escalation between countries, she said.

“These involve, first of all, the traditional financial agenda, coordinating macroeconomic policies, financial regulation, implementing tax reforms, and trade issues. Why are these most key issues combined in one session? Well, maybe because these are the main risks threatening the stability of future economic growth. Prominent among such keys issues are the various consequences of macroeconomic policies in developed countries. The same scaling down of quantitative easing in a number of big economies, which reflects primarily on emerging markets, the toughening of financial conditions, leading to the volatility of capital flows, lower investments, which reflects primarily on the growth of economies,” Lukash said.

Other risks to be discussed involve the political developments in several countries, primarily Brexit, and trade wars, she said.

“There exist various assessments by international organizations but they all are fairly significant: if the current situation follows a negative scenario, the predicted 3.7% growth of global GDP in next two years will, of course, be lowered significantly,” Lukash said.

Risks also include economic digitization, the rising volatility of energy markets. and a whole host of other aspects, she said.

Cryptocurrencies were discussed at the level of finance ministers and will feature on the summit’s agenda, Lukash said. “Certainly, it is currently one of the topics, primarily of the financial agenda,” Lukash said.

“I think, at the level of leaders, only some them will perhaps pay attention to this topic. After all, this is a fairly applied aspect for the leaders, somewhat technical, maybe,” Lukash said.