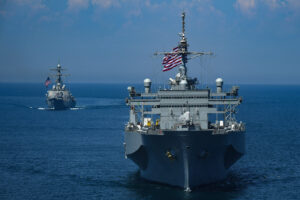 The United States plans to send two warships to the Black Sea in a show of its support for Ukraine amid Russian militarization along its border, Turkey’s foreign ministry was reported as saying Friday.

Turkey’s statement confirms reporting that the U.S. Navy was considering Black Sea deployments to send a message to Moscow. The White House expressed increasing concern with what it said was the largest concentration of Russian troops along the Ukrainian border “than at any time since 2014,” when the eastern Ukraine conflict broke out.

They will then reportedly return on May 4-5.

“We were notified through diplomatic channels 15 days ago […] that two U.S. warships will pass toward the Black Sea,” AFP quoted a Turkish foreign ministry official as telling reporters.

The 1936 Montreux Convention requires warships not belonging to Black Sea states to seek passage from Turkey at least 15 days before sending vessels through the Bosphorus and Dardanelles straits. The foreign warships are allowed to stay in the Black Sea for 21 days.

Russian lawmakers criticized the scheduled U.S. warship deployments for “creating false illusions” in Ukraine and creating the pretext to “strengthen their own presence in the region in order to stay there.”

Germany on Thursday became the latest among Ukraine’s Western allies to ask Russia to withdraw its troops near the Ukrainian border, which President Vladimir Putin responded to by accusing Kiev of provocations.

Kremlin officials said the movements were non-threatening but warned that an outbreak of hostilities in the separatist-held Donbass region would mark “the beginning of the end” for Ukraine.