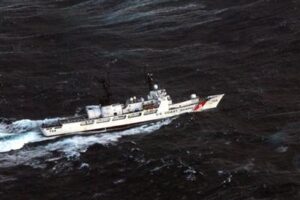 PETROPAVLOVSK-KAMCHATSKY. Aug 11 (Interfax) – The Russian border patrol ship Kamchatka and the United States Coast Guard Cutter Munro have carried out a joint patrol in the Bering Strait along the Russian state border, the press service of the Russian Federal Security Service’s (FSB) Border Department for the Eastern Arctic region said on Tuesday.

The patrol was conducted as part of this year’s coordinated actions plan between the FSB Border Department for the Eastern Arctic Region and the 17th U.S. Coast Guard District.

“The main objectives of such patrols are to prevent violations in the field of border and environmental protection legislation and work out protocols of interaction between forces and hardware of the two countries’ border agencies. The patrol also included training sessions to practice joint responses to poaching activity and rescuing seafarers in distress,” the press service said.

In addition, maritime border guards practiced interaction with a ship-based helicopter which took off from the deck of the U.S. ship to monitor the situation in the Bering Strait area. No signs of unlawful activities were detected during the joint patrol, the press service said.