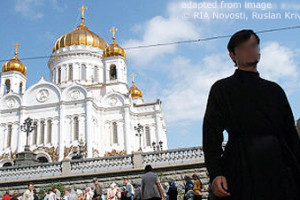 Vladimir Putin attended events to mark the 1030th anniversary of the Baptism of Rus.

A Patriarchal Liturgy was held for the first time in the open air on the Kremlin’s Cathedral Square. As the service was coming to a close, the President joined the religious procession and walked with the believers to the monument to Prince Vladimir Equal to the Apostles on Borovitskaya Square.

The Patriarch of Moscow and All Russia Kirill, the Patriarch of Alexandria and All Africa Theodore, Presidential Plenipotentiary Envoy to the Central Federal District Igor Shchegolev and Moscow Mayor Sergei Sobyanin also joined the procession.

Representatives of the Orthodox churches of Alexandria, Antioch, Jerusalem, Georgia, Serbia, Bulgaria, Cyprus, Albania, Poland together with the Orthodox Church of the Czech Lands and Slovakia said a special prayer at the Prince Vladimir monument.

Participants and guests of the celebrations marking the 1030th anniversary of the Baptism of Russia,

The Baptism of Rus was a major turning point in our history, an event accelerating civilization, transforming spiritual strength. It determined Russia’s further centuries-long path and influenced global development.

We traditionally celebrate this event in a special way, with deep reverence for our ancestors who showed wisdom and great foresight by commencing the era to which we all belong today.

The Baptism of Rus is inextricably linked with the name of the Holy Prince Vladimir Equal to the Apostles, who made this decisive choice and became the conductor of faith. He was the one who first saw it as moral support, beauty, the light of truth and virtue, and a basis for renewal, for greater unity and community of peoples living in ancient Rus.

A warrior who has gone through fierce battles and trials, Vladimir became an enlightener, a creator. Under his leadership, churches and monasteries, cities, schools and libraries were built.

Baptism was the starting point for the development of Russian statehood, the true spiritual birth of our ancestors, the definition of their identity, the heyday of national culture and education, as well as the development of multifaceted ties with other countries.

This certainly could not have been easy, but Orthodoxy did something that had not happened before: it turned to man, his conscience and his soul with an eternal call for mercy as well as goodwill and love.

And that call was indeed heard. The baptism of Russia opened to its peoples genuine moral and spiritual guidelines.

Russian historian and philosopher Lev Gumilyov said, “Baptism gave our ancestors a higher freedom – the freedom of choice between good and evil, and the victory of Orthodoxy gave Russia a thousand-year history.”

The peoples that embraced Christian truths as their own achieved unprecedented heights in politics, art, literature, science and economic activity, received colossal experience of unity, which more than once saved, strengthened and supported our Motherland in the most severe historical turmoil.

This greatest spiritual legacy is timeless. It is our sacred duty to preserve and to enhance it for future generations.

It is very important that modern society cares about strengthening moral supports. A huge role here is played by charitable and educational organisations, by all responsible and concerned citizens of our country, and of course, by the Russian Orthodox Church, which never stopped its selfless work.

We deeply appreciate this feat, its tireless prayers for Russia, its people, our compatriots abroad, our neighbours and brothers for the sake of peace, harmony and goodwill.

I congratulate all of us on the 1030th anniversary of the Baptism of Rus, and the Day of St. Prince Vladimir. I wish you all prosperity and every success.

[faetured image is file photo from another occasion]