RUSSIALINK: “‘The Sounds of Science’ Where Composers and Scientists Meet; What is the music of a vaccine or a carbon-cleansing forest?” – Moscow Times 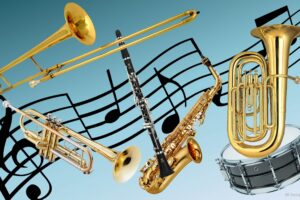 A group of Russian composers and sound designers were so inspired by the recent achievements of Russian science that they created the musical and visual “music” of scientific processes.

Called “The Sounds of Science,” the music was made by the Moscow-based audio production studio Monoleak, a group of composers and sound designers who have been working in music production for multimedia and film projects across the globe since 2012. In the past they have collaborated with a number of global brands and organizations, such as NASA, Samsung, FIFA, Lamborghini and LEGO.

The new project is a collaboration with Russia’s Ministry of Education and Science. The ministry selected scientific works from different fields that reflect the diversity of current research.

The nine works include the music of a neutrino telescope, a Covid-19 vaccine, an ion collider, a forest cleansing carbon dioxide from the air, and even the Nauka primary laboratory of the Russian Orbital Station.

“The composers and sound designers were given detailed materials so they could analyze and interpret the principles of the objects and create the works,” Alina Golubeva, executive director of Monoleak studio, told The Moscow Times. “The studio had extraordinary access to photo and video materials. The composers could also consult with the scientists if they needed additional details or a better understanding of their research.”

“The goal of this project is to popularize science, and music, a medium that everyone knows and understands, can evoke the essence of each scientific object,” Golubeva said.

Scientists at the Joint Institute for Nuclear Research in Dubna not far from Moscow are researching the formation of the universe. To reconstruct what it was like billions of years ago, they have the Nuclotron-based Ion Collider Facility, or NICA — a collider that accelerates and collides particles. When the particles collide, they shatter into even smaller elements, such as quarks and quark-gluon plasma that existed long before the formation of our universe. In a sense, NICA is a kind of a time machine.

Since the NICA works by collision, Golubeva explained, “the music is based on the concept of multi-space rotation, when each part starts accelerating at its own speed, collides with other instruments and gives birth to new rhythmic structures, which seem to appear by themselves.”

One of Russian coronavirus vaccines, CoviVac, was also “translated” into music. Produced at the Mikhail Chumakov Federal Research and Development Center for Immunobiological Drugs, CoviVac was made the way most vaccines have been made over the decades. The scientists used a strain of coronavirus that is not infectious but still provokes an immune response. The body initially rejects the substance and then develops immunity to it. “The piece is based on the idea of music and melody grow out of chaos,” the composers wrote. “At first, it appears as cacophony, a set of atonal sounds that our ears try to reject, but when they come together in unison, we accept them, and there is harmony.”

Nauka is the primary laboratory on the Russian Orbital Station. It works in connection with the Mini-Research Modules Rassvet and Poisk and is used to run a wide range of scientific experiments in outer space. The composition inspired by the laboratory’s work is a musical image of space and the attempts of humans to get to know it better. The composers explore the relations between a human being and space through the dialog between an orchestra and a voice representing both a daring explorer and all of humankind.

You can listen to “The Sounds of Science” is online here. The site is in Russian, but you can click on the audio clips: https://soundsofscience.ru/

[article also appeared at themosc[featured image is file photo from another occasion]owtimes.com/2021/12/29/the-sounds-of-science-where-composers-and-scientists-meet-a75946]