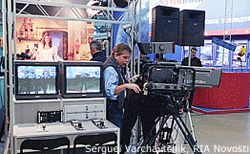 A new survey has shown that state-run television maintains its hold on the Russian public’s news consumption habits despite a trend in which young Russians are increasingly getting their news online.

Among Russians polled by the independent Levada Center, 85 percent said they watch television for news about Russia and the world. Meanwhile, 60 percent of surveyed Russians said they use social media for the news, one-third of whom use social media daily or near-daily.

“Television remains the most popular source of information. Moreover, 70 percent of Russians receive information there daily or almost daily,” Levada wrote on Wednesday.

A majority, or 51 percent, of surveyed Russians said they trust television news the most. Only 19 percent said they found online publications trustworthy, followed by 15 percent who voiced trust in news read on social media.

Channel One, Rossia and NTV – all state-run channels – were named the top three most trusted news sources for the second year in a row.

Levada conducted its survey among 1,600 people in 52 Russian regions in March.