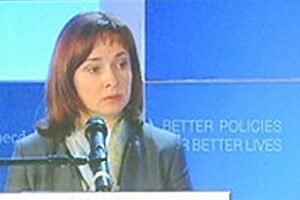 Surging inflation is not a temporary trend and poses a serious threat to Russia’s economic recovery, Central Bank chief Elvira Nabiullina has warned.

“We have very hot inflation and high inflation expectations. At first it seemed like it would be temporary. But now we don’t think so,” Nabiullina told the opening session of the St. Petersburg International Economic Forum (SPIEF) on Thursday morning.

“The continued acceleration of inflation will be an impediment to economic growth.”

Russian inflation is currently running at 5.5%, well above the Central Bank’s official 4% target. Analysts expect the bank to hike interest rates by at least 25 basis points — from 5% to 5.25% — when it meets next Friday. Nabiullina’s comments were one of her last chances to guide the market on her likely move before the regulator enters a communications blackout in the days leading up to the rate-setting decision.

Her assessment puts her at odds with Central Banks in the U.S. and Europe, who have stressed that the rise in global inflation coming out of the pandemic is a “transitory” phenomenon which does not require rate hikes or an immediate cut to asset-purchasing programs to quell runaway prices.

“We are normalizing our monetary policy in a different method to the developed economies. The U.S. Federal Reserve and the EU believe inflation is temporary. But we believe that the inflation in Russia has a certain level of sustainability. We believe it’s not a temporary increase, but a stable increase,” she said.

Price rises in the U.S. hit their fastest rate in 13 years in April as the economy began to open up after the coronavirus pandemic, commodities prices surged and manufacturers dealt with bottlenecks in their supply chains.

Nabiullina highlighted high levels of consumer concern over rising prices as a dangerous trend that could push Russia into a vicious cycle of price rises if left unaddressed.

“Inflation expectations are growing and at their highest level for four years. This is changing behavior. Consumers are shifting their purchases … If we act late, we’ll have to raise rates higher. Normalizing monetary policy is not an impediment to economic growth,” she said.

Given Russia’s history of economic crises, devaluation and volatile prices, inflation is a particularly sensitive topic — surveys regularly show rising prices are the public’s top concern. While Russia’s official inflation rate is at 5.5%, the public believes prices are rising almost three times faster — with observed inflation coming in at almost 15% in May.

The Central Bank has said it will continue to raise rates over the year, hitting around 5.75% by December. But markets are pricing in a much steeper increase, with prices suggesting traders expect rates could be closer to 6.5%.

Nabiullina’s comments won support from Finance Minister Anton Siluanov, who added that Russian government spending would also need to be brought back down to pre-pandemic levels — rejecting the idea that Russia might ditch its spending austerity.

“If we continue with an increased level of spending, we will overheat the economy,” he told the forum.

“We already see some elements of this. Inflation is higher than our 4% target. That will lead to devaluation of incomes, devaluation of salaries and devaluation of government support. It’s obvious that both monetary policy and fiscal policy must switch to play a normal role.”

“We are very clear that the longer this takes, the more difficult it will be to get out of these super soft policies,” he added.

Both were speaking at the opening plenary session of SPIEF — Russia’s flagship economic conference, sometimes dubbed the “Russian Davos,” in reference to the World Economic Forum’s annual meeting in Switzerland.

The first session is reserved for the country’s top economic decision makers and has previously been a forum for tense public debates over whether the government’s economic priority should be stability and taming inflation, or spurring growth and boosting incomes.

While Nabiullina and Siluanov were aligned on the need to bring inflation under control, the two diverged over Russia’s controversial use of price caps and export quotas in a bid to limit price increases of certain food stuffs.

“Let’s not overstate the situation,” Finance Minister Siluanov said. “High prices are concerning. But we’ve never said ‘tomorrow in shops the price of bread should be 100 rubles.’ We’ve never done something like that.”

Since the start of the year, the Russian government has struck a series of deals with the country’s retail chains and producers to limit prices of some goods such as sugar and oil — a measure the government says has helped bring prices under control.

The Central Bank disagrees. Governor Nabiullina doubled down on her criticism Thursday, saying that temporary price caps distort the economy and it is unclear what impact they have on inflation since consumers know prices will jump once the government restrictions end. She also warned against a longer-term government fix, such as subsidizing suppliers who sell goods like grain, sugar and oil within a government-approved price range.

“My point of view is clear. Price regulation in a market economy must only be an emergency measure,” she said.

“The whole economy cannot be based on duties, dampers and subsidies.”