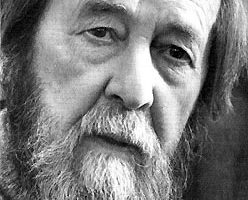 The collection of items and documents of the Museum of Russia Abroad consists of over 18,000 exhibits. Among them are pieces of art (paintings, graphics and sculptures), photographs from private collections and archives of public organisations, household items, and printed and documentary sources.

Vladimir Putin made a decision to construct a new building for the Museum of Russia Abroad with additional museum space. The grand opening took place on May 28, 2019. The complex includes a museum, archive and library, as well as research, information and publishing, and cultural and educational centres.

President Vladimir Putin of Russia: Mrs Solzhenitsyna, once again, in the presence of our colleagues from the media, I would like to wish you a happy birthday.

I want to thank you for everything you are doing today. What you did before, when you actually edited everything that was written by Solzhenitsyn, is one thing. But you continue to do this work for all of us so we will not forget, so Alexander Solzhenitsyn’s legacy and everything that is connected with his life and work will not be forgotten.

When I was writing [making an entry into the Book of Honored Guests at the House of the Russian Expatriate Community] at the request of our colleague, I noted that Russian emigration has always been inextricably linked spiritually with the Motherland, Russia. I believe this is what makes Russian emigration special, since even being far from the Motherland, it has made and is now making a significant contribution to Russia’s spiritual life. We must be aware of this, keep this in mind and use it in our everyday work.

Again, thank you and your colleagues who take care of this house and this museum, because this is part of our history, which we should never forget in order to never repeat such mistakes. We just noted that 10 million people found themselves beyond Russia’s borders following the collapse of the Russian Empire and World War I, and another 25 million people after the collapse of the Soviet Union. These are actual people, human destinies, who represent a vast portion of our country. Such an enormous loss. We must be aware of this and understand what caused these disasters, and do our best to prevent them from ever happening again.

After all, when the country was heading for this ordeal, no one was thinking this could happen. That is the worst part. But when it happens, it is too late to try to take things back. Many things get lost forever. Much of what is lost is, indeed, lost forever.

Thank you very much for preserving this historical memory, for us to remember it, especially, younger people, and for promoting the very best that was written by Alexander Solzhenitsyn, especially among young people.