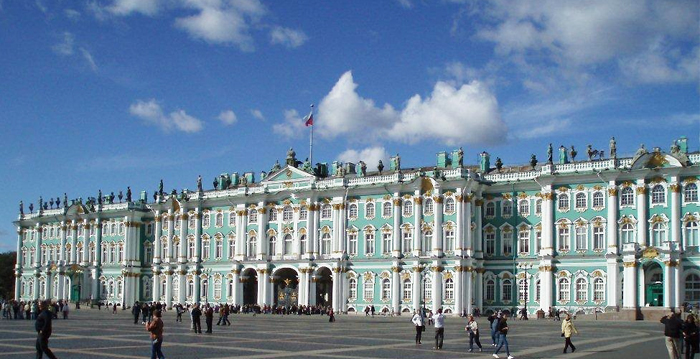 Yulia Savikovskaya reports on the arts and is writing a book on the anthropology of music.

The major museums of Moscow and St. Petersburg have what looks to be an amazing year planned – so much so that it might take some skill in time management to see everything. Here are our picks for museum-hopping in 2022 to see classical and modern, Western and Russian art, photography and new technologies installations in various museums and galleries of St. Petersburg and Moscow.

The first International Biennale ‘Art for the Future’

Why not to start the new year preparing for the future? The Multimedia Art Museum in Moscow has just opened the International Biennale “Art for the Future” that will last until early April. It includes art projects based on such technologies as neural networks, robotics, 3D animation, virtual and augmented reality. The exhibition reflects the changes that technology brings to our lives and involves interactive installations that make viewers part of the creative process. This makes the show particularly interesting for families with curious children and young adults. Works by Olafur Eliasson, the art collective teamLab, Antony Gormley, Philip Colbert, Michal Rovner, Pavel Pepperstein, as well as many Russian artists from various Russian regions will be on display. Some projects were created in collaboration between scientists and artists, and some installations and objects were created specifically for the Biennale. The show will have a rich educational program, and you can also browse artforthefuture.art website where Russian and foreign digital art will be presented. Don’t miss it! Tickets and information available here.

The State Tretyakov Gallery’s many shows

If you haven’t already seen the show of works by Mikhail Vrubel, it’s running until March. You should also plan to see the show with a lot of emphatic periods in the title: Diversity. Unity. Modern Art from Europe. Berlin. Moscow. Paris. It’s in the western wing of New Tretyakov Gallery, and it runs until early March, too. Be sure to check out the multi-platform research project called New Elements that shows 12 works of international artists who see the world as a computational machine. This was organized by the Laboratoria Art & Science Foundation.

Set to open in 2022 is first Russian retrospective of the Finnish master Aksaeli Gallen-Kallela (1865-1931) from April to August in the main building that will exhibit paintings from Russian and Finnish state and private collections. Another important show is a big exhibition dedicated to the 150-th anniversary of the birth of Russian impressionist painter Igor Grabar that will open at the main building of Tretyakov Gallery in October. TBook tickets to this one and fill your vision with light and color.

And you may be interested in the new memorial museum dedicated to brothers Sergei and Pavel Tretyakov that is set to open this year. Why not to learn more about the life of art collector brothers at their own house?

Book your tickets separately to these exhibitions.

In 2022 Russia will welcome the first exhibition of the late Christian Boltansky, the French artist whose influence on contemporary art and multimedia can be traced in multiple world galleries and art history catalogues. The exhibition Esprits, supported by Institut Français in Russia, will show installations, videos and objects that have been especially chosen by Boltansky over the course of 10-15 years, as well as the ones that he made specifically for this project. Important themes are memory and loss, existential choice and destiny, individual and collective history. Christian Boltansky envisioned Esprits as a certain mythical space where the workers who had been killed during Bloody Sunday in 1905 are awaiting their after-life trajectories to heaven or to hell. The exhibition will run from March to May 2022, with the digital platform Boltansky x Manege: Online Viewing Rooms also launching in March.

When you leave the Manege, head up to Vassilyevsky Island to the Erarta Museum to explore a photo exhibition of one of the most influential fashion photographers of the 20th century – Helmut Newton. His work for Elle, Vanity Fair, Playboy, Harper’s Bazaar, as well as photo portraits of Andy Warhol, Carl Lagerfeld, David Hockney and Charlotte Rampling are on display until April. Book your tickets to Manege Central Exhibition Hall, St. Petersburg here.

The collection of famous art collectors has been on display at the Louis Vitton Foundation in Paris since September 2021, seen by 450,000 visitors and counting. In June 2022 it will open at the Pushkin State Museum of Fine Arts: a reconstruction of the collection of Russian and French art gathered by the Moscow-based merchant brothers at the turn of the 19th-20th centuries. It includes French impressionists (Monet, Sisley, Renoir) and post-impressionists (Van Gogh and Gauguin), as well as Russian giants Serov, Levitan, Vrubel, Larionov, Goncharova, Mashkov and others.

In parallel with its opening, the State Hermitage Museum in St. Petersburg will open a retrospective of Sergei Shchukin’s collection featuring paintings from State Pushkin Art Museum.

The year will end with another exciting show: The Century of Arcimboldo will open in November 2022 at the State Pushkin Art Museum, and will include works from European state and private collections. Do you remember those surreal portraits made of vegetables? Go and be amazed by these and other aspects of this unique painter’s world. Tickets available here.

If Moscow can’t go to Genoa, Genoa will send its treasures to Moscow

Although we all hope to be able to travel to Italy in 2022, we can never be sure. But at least we know we can go to Genoa in September at the State Historical Museum’s Treasures of Genoa exhibition. Master works from the Genoa Cathedral, Museum of St. Augustine and Strada Nuova Museums (Palazzo Rosso, Palazzo Bianco and Palazzo Doria-Tursi) will come to Russia and include, among many other precious works of art, paintings by Anthony Van Dyck and Alessandro Magnasco as well as Caravaggio’s “Ecce Homo” — to be exhibited in Moscow for the first time.

Book your tickets here to the State History Museum, which is, incidentally, worth a visit at any time since it traces the history of Russia from the early ages until today.