RUSSIALINK: “Can Russia Turn a Plastic Corner? As the country grapples with a waste crisis, some supermarkets have begun charging shoppers for plastic bags.” – Moscow Times/ VICTORIA DMITRIEVA 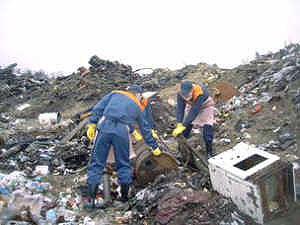 Tatiana Chulyuskina likes to think of herself as an efficient housekeeper.

For the past two years, the 32-year old graphic designer has lived by the motto, “There’s nothing that cannot be reused.” She brings her own cup with her to coffeeshops and wraps her food in re-usable packaging. Once a month, she throws out a single bag of garbage.

In most Western countries, Chulyuskina would be just another eco-conscious millennial. But in Russia, her tips on how to lead a “zero waste” lifestyle are something of a novelty to her 27,000 Instagram followers.

“The thought of my children living in a world full of waste, full of plastic bags that I only used for 10 minutes struck me,” Chulyuskina says of the moment she decided to radically change her lifestyle.

Recycling has yet to make its mark in Russia. Waste is rarely separated and recycling bins are, at best, difficult to find, even in the glitzy capital. Garbage is still chucked down waste chutes in Soviet-era apartment buildings or left in large dumpsters in courtyards.

Slowly, however, the question of responsible waste disposal is being taken up more widely as Russians become increasingly attuned to the consequences of overflowing landfills.

The year 2018 began with a string of protests in Volokolamsk, a town some 100 kilometers outside Moscow, when dozens of residents were hospitalized following reports of noxious gases emanating from a landfill nearby. Other protests have followed in places as far apart as in western Siberia’s Chelyabinsk and ongoing protests in Arkhangelsk in the north.

In a recent Greenpeace survey, half of respondents blamed plastic bags for the trash crisis. Indeed, more than 26 billion plastic bags are handed out every year in shops across Russia, says Alexander Ivannikov of Greenpeace’s “Zero Waste” project.

“The saddest part is that on average each bag is used for just 12 minutes, after which it becomes waste,” he told The Moscow Times. “To solve the crisis, we need to solve the problem with plastic waste first.”

But that is a tall order, and one that the Russian leadership appears to be ignoring. When ordinary Russians have complained to President Vladimir Putin about overflowing landfills during his annual televized call-ins, he has responded with symbolic gestures, by ordering specific landfills to be closed or moved elsewhere. And when the head of Greenpeacе asked Putin several years ago to ban plastic bags altogether, the president said the move would lead to job losses.

Meanwhile, budget shops, high-end supermarkets and everything in-between hand out plastic bags for even the smallest purchases, which is widely regarded as a hallmark of good service.

Many Russians remember a time when bags were coveted souvenirs from the West, says Boris Akimov, the founder of the organic grocery cooperative LavkaLavka. “In the Soviet Union, they were considered a rarity.”

With the advent of capitalism in the ’90s, plastic became more common, but many still stockpiled bags at home – just in case. “Encouraging Russians to start hoarding plastic for reuse can feel like asking them to return to the past,” Akimov says.

That isn’t quite the forward-looking message activists are hoping to promote.

Last year, Greenpeace invited Russia’s top 20 retailers to join their “Ban the Bag” campaign to reduce the use of plastic bags. Only four major names- Azbuka Vkusa, Vkusvill, Ashan and a Russian branch of Spar – signed on. And in at least one case it was shoppers themselves who demanded change.

“Customers were starting to comment on our plastic waste on social media,” says Andrei Golubkov, a spokesperson for Azbuka Vkusa, a high-end grocery chain. “They were a minority of our consumers, but they were the most active.”

Heeding their call, Azbuka Vkusa began charging 5 rubles ($0.7 cents) per bag in October, a move which the company claims has reduced the number of plastic bags leaving their stores threefold.

LavkaLavka had already replaced plastic with paper when in November it introduced a discount scheme for customers who purchase food in reusable containers. The aim, says Akimov, is to completely banish plastic from its shops by 2021.

But the transition has not been easy, even for LavkaLavka’s exclusive and loyal customer base. “When we started charging for paper bags as well, the reactions were mixed. Some were very negative,” Akimov says. “We need to make sure our customers know that our goal is not just to make more money.”

Vkusvill, another grocery chain, has also faced backlash for adding a surcharge, spokesperson Marina Purim told The Moscow Times. But “there was no other way,” she says. “The most effective way to reduce plastic waste is to make people pay for it.”

A next step would be to introduce alternative biodegradable packaging, in the footsteps of some countries including, recently, Italy. But, as Golubkov points out, “that requires there to be infrastructure to process biodegradable waste. And, in Russia, that doesn’t exist.”

Meanwhile, “zero waste” stores are springing up across the country, including in St. Petersburg, Petrozavodsk and Perm.

In Krasnogorsk, a town outside Moscow, Larisa Petrakova sells groceries from large tubs which customers transfer to their own containers and then pay for by weight. “I’m not an activist, I’m just your average person who wants to be conscious about waste,” Petrakova, 37, says. “When you reduce your waste, there’s less to recycle.”

Environmentally conscious Russians are also coming together and scaling up their activities, using the internet as a platform.

Dmitry Zakarlyukin first launched his “eco taxi” initiative in Chelyabinsk in 2013. He offers a recycling pick-up service, which customers can order online for 500 rubles ($7). In the years since it launched, the service has expanded to St. Petersburg and Moscow and there are plans to move into other towns.

The lack of adequate infrastructure in Moscow means trash is either burnt in cities nearby or it goes to neighboring regions,” he says. “Given our Russian reality in which people aren’t given a voice or a role to play, the waste problem is one case where we can actually do something ourselves.”

With small businesses leading the way, some local officials are cautiously getting on board, too. Last summer, Leningrad region’s culture committee banned the use of plastic at local cultural events.

“Since we hold more than 100 festivals and have five theaters and around 30 museums, we decided to try to set an example by reducing plastic waste,” Yevgeny Chaikovsky, the head of the committee, told The Moscow Times. “It’s important to educate a new generation.”

Akimov of LavkaLavka also has his eyes on the future. “In the early 90s, drinking water from a plastic bottle instead of drinking tap water like we used to in Soviet times seemed unusual, but now we can’t imagine living without it.

“Every practice needs time to get used to.”

[featured image is file photo from another occasion, not directly related to article subject matter]