Udaltsov calls for consolidation of left-wing forces in Russia 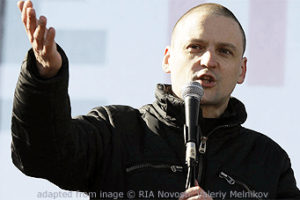 ST. PETERSBURG. Oct 25 (Interfax) – The Left Front movement will resume its activity before the Russian presidential election, movement coordinator Sergei Udaltsov told reporters in St. Petersburg on Wednesday. “We’d like to declare that the left-wing movement in Russia is not just looking back but is also mindful of the future,” Udaltsov said, adding that it was not accidental […]

NEWSLINK: “Alexei Navalny’s Techno-Populism. Is opposition leader Alexei Navalny a ‘Kremlin project,’ a ‘future tyrant,’ or ‘Russia’s only hope?’ Conversations about Navalny often proceed along these moral lines, though it is Navalny’s practicality-especially in the technological realm-that has been the driving force of his popularity.” – Carnegie Moscow

“… Udaltsov’s release from prison and his subsequent criticism of … Navalny have sparked renewed discussions about what Russia would look like under a Navalny presidency. These conversations often take place along moral lines: ‘Would he be a tyrant?’ and ‘Is he better or worse than Putin?’ are common refrains in Russia today. The source of Navalny’s popularity is no […]

MOSCOW. Aug 10 (Interfax) – Prominent leftist Russian opposition leader Sergei Udaltsov, who served four years and six months in a penitentiary for organizing mass disturbances, plans to revive the Left Front organization and work toward consolidating leftist forces, including those in parliament, to nominate a sole candidate in the 2018 presidential elections. “The nearest objectives that I see […]

(Moscow Times – themoscowtimes.com – Yekaterina Kravtsova – April 8, 2013) Anti-Kremlin leader Alexei Navalny walks methodically past a crowd of protesters standing behind metal barricades on Bolotnaya Ploshchad, heading for a stage. Two baby-faced police officers step out of his way, blank expressions on their faces. “We’re with you,” a man in sunglasses says to Navalny. “Thanks,” Navalny answers […]

NEWSLINK: Prospect of show trial stirs some Russians’ memories of Stalinism; Some Russian activists are drawing parallels between a potential ‘mega-trial’ for leftist leader Sergei Udaltsov and Stalin’s show trials in the 1930s. But the comparison remains controversial.

(Prospect of show trial stirs some Russians’ memories of Stalinism; Some Russian activists are drawing parallels between a potential ‘mega-trial’ for leftist leader Sergei Udaltsov and Stalin’s show trials in the 1930s. But the comparison remains controversial. – Christian Science Monitor – By Fred Weir – October 30, 2012 – http://www.csmonitor.com/World/Europe/2012/1030/Prospect-of-show-trial-stirs-some-Russians-memories-of-Stalinism) The Christian Science Monitor reports on concerns by some onlookers […]

(Moscow Times – themoscowtimes.com – October 24, 2012) Opposition leader Sergei Udaltsov has no intention of violating the travel restrictions that currently bar him from leaving the country, his lawyer said Wednesday. Defense attorney Violetta Volkova said that her client ­ a prominent organizer of anti-Kremlin protests ­ was under constant surveillance, Interfax reported. Explaining why Udaltsov cannot be reached […]