JRL NEWSWATCH: “Stalingrad by Vasily Grossman – a sweeping tale of war and life; This immense prequel to ‘Life and Fate’ on the siege of Stalingrad finally gets its English translation” – Financial Times/ Tobias Grey

“… At nearly 1,000 pages Stalingrad is slightly longer than its sequel. … Grossman places an earlier focus on the Shaposhnikov family and friends … their lives … thrown into disarray by the impending Battle of Stalingrad. Hitler’s huge offensive on the Eastern Front has driven Soviet forces into a prolonged retreat. Stalingrad … on a clifftop by the Volga […]

“… the video has also been chided for taking things too far, including on state television, underscoring the tension around the Kremlin’s efforts to drum up support despite a stagnant economy and a fall in living standards in recent years. * * *  Putin has made commemoration of the World War II [Stalingrad] victory a centerpiece of his rule, portraying […]

Putin did not voice support for bringing back Stalingrad – spokesman

(Interfax – Moscow, June 9, 2014) Russian President Vladimir Putin has not voiced his preferences and has not specified whether he supports the idea of renaming Volgograd Stalingrad or stands for keeping its name, presidential spokesman Dmitriy Peskov has said. “Answering a question from veterans in Normandy, Putin said that changing the name of a city or a settlement is […]

(Voice of America – James Brooke – November 19, 2013) A foreign correspondent who has reported from five continents, Brooke, known universally as Jim, is the Voice of America bureau chief for Russia and former Soviet Union countries. From his base in Moscow, Jim roams Russia and Russia’s southern neighbors. Seventy years have passed since the Battle of Stalingrad, the […]

(Russia Beyond the Headlines – www.rbth.ru – Yulia Ponomareva, Combined report – February 7, 2013) Disputes about Stalin’s role in history have flared up again, as the legislature of the city of Volgograd rules that the city shall be called Stalingrad on dates commemorating key anniversaries of World War II. Volgograd, one of 15 Russian cities with a population of […]

TRANSCRIPT: Putin Speech at a concert marking the 70th anniversary of victory in the Battle of Stalingrad 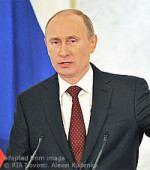 (Kremlin.ru – February 2, 2013) Volgograd PRESIDENT OF RUSSIA VLADIMIR PUTIN: Good afternoon. Dear friends, dear veterans, Over these days our entire country, our entire nation is celebrating a glorious date, the 70th anniversary of our army’ victory in Stalingrad. This is one of the best examples of courage and heroism in international military history. It is no accident that […]