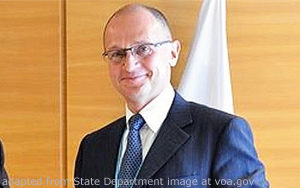 (Moscow Times – themoscowtimes.com – November 2, 2016) Sergey Kirienko, the new first deputy head of Russia’s Presidential Administration, met with political analysts on Tuesday, stating that the Kremlin will not welcome radical political rhetoric in the national news media, according to the Dozhd television station. Kirienko reportedly spent most of the meeting listening to the eight experts in attendance, […]

Sergey Kirienko, from nuclear to political power; After ten years as head of Rosatom, Sergey Kirienko is now deputy head of Russia’s Presidential Administration. What will he bring to the job?

(opendemocracy.net – Vladimir Slivyak – October 11, 2016) Vladimir Slivyak is deputy chairman of Ecodefence. In 2005, when Sergey Kirienko was put in charge of Russia’s Federal Atomic Energy Agency (renamed Rosatom in 2007), he’d never had any experience of the nuclear power sector. Later to make headlines as Russia’s youngest prime minister, Kirienko’s political career began in 1997, when […]