ROSTOV-ON-DON. Sept 3 (Interfax) – The parliament factions of the Russian Communist Party and A Just Russia should pool efforts to make the pension referendum happen, A Just Russia’s faction leader Sergei Mironov said at a press conference in Rostov-on-Don. “I have offered our Communist Party colleagues in the State Duma to combine efforts [towards holding the referendum]. Clearly, everything […]

Kremlin proceeds from moratorium on death penalty in Russia 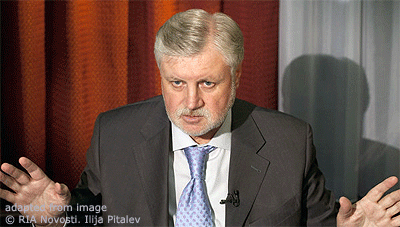 MOSCOW. Nov 20 (Interfax) – Russian presidential press officer Dmitry Peskov has refrained from giving detailed comments on the proposal made by Sergei Mironov, chairman of the State Duma faction A Just Russia, to use the death penalty on terrorists, saying that the Kremlin currently proceeds from a moratorium on this measure of punishment. “It’s a very complex issue. There […]

BNE: Russia won’t move into East Ukraine unless there is a massacre of its citizens – Sergei Mironov

(Business New Europe – bne.eu – March 20, 2014) “Russia won’t deploy troops in eastern Ukraine unless there is a “massacre” of its citizens there, says Sergei Mironov, leader of pro-Kremlin Just Russia party and a Putin ally, reports Bloomberg. “It would be highly undesirable and I think it’s unlikely, unless we see large-scale massacres, if something awful happens and […]