MOSCOW. Oct 23 (Interfax) – The Moscow government has formally granted Memorial’s request to hold a ceremony commemorating victims of political repression at the traditional venue near the Solovetsky Stone on Lubyanka Square on October 29, Yelena Romanova from the city administration’s regional security department said. “There was an interagency meeting today to discuss the provision of public peace and […]

(RFE/RL – rferl.org – The Daily Vertical: Brian Whitmore – March 30, 2016) How an autocratic regime chooses to prosecute its dissidents can be very revealing. Consider the case of performance artist Pyotr Pavlensky, who was arrested in November for setting fire to the entranceway to Lubyanka, the infamous headquarters of the Federal Security Service in Moscow. By targeting the […]

The Public’s Top Picks for the Pedestal on Lubyanka Square 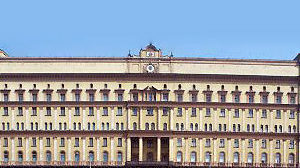 (Moscow Times – themoscowtimes.com – Maria Naum – July 17, 2015) On Aug. 22, 1991 at the peak of euphoria over the failure of the coup against Mikhail Gorbachev, the statue of Felix Dzerzhinsky, founder of the Soviet secret police, was pulled from its pedestal on Lubyanka Square. Since then, the square has remained empty as the public and authorities […]

Moscow Duma Says Dzerzhinsky Will Not Return to Lubyanka

(Moscow Times – themoscowtimes.com – D. Garrison Golubock – February 12, 2014)  A statue of Felix Dzerzhinsky or Iron Felix, a Bolshevik revolutionary and founder of the Cheka, the predecessor of the KGB, will not be restored to its erstwhile location on Lubyanskaya Ploshchad, the Moscow Duma’s committee on monuments announced Tuesday. “Restoration of the monument is impractical at the […]

Interfax: Moscow commission rules not to reinstall monument to Dzerzhinsky on Lubyanskaya Square

MOSCOW. Feb 11 (Interfax) – The Moscow City Duma’s monumental art commission unanimously decided on Tuesday not to return a monument to Felix Dzerzhinsky, a prominent Soviet statesman and founder of the Soviet security services, to Lubyanskaya Square in central Moscow. “Taking into account the current circumstances in society, I propose refraining from returning the monument. This is more of […]