NEWSLINK: “Chrystia Freeland and the complexities of history [re: Ukraine] 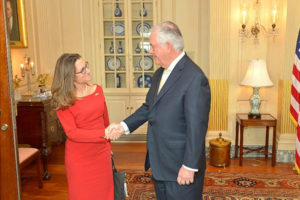 “On March 8, the Globe and Mail reported that ‘Foreign Affairs Minister Chrystia Freeland has known for more than two decades that her maternal Ukrainian grandfather was the chief editor of a Nazi newspaper in Nazi-occupied Poland.’ … Her grandfather, Michael Chomiak, was a Nazi propagandist for Krakivski Visti (Crakow News), supervised by German intelligence officer Emil Gassert. Its printing […]