(Moscow Times – themoscowtimes.com – Dec. 10, 2019) The World Anti-Doping Agency (WADA) on Monday hit Russia with a four-year ban from competing or hosting major world sporting events, including the Olympic Games and World Championships. The move comes after WADA’s executive committee unanimously ruled that Moscow had tampered with doping laboratory data. Russian athletes will only be able to […]

(Moscow Times – themoscowtimes.com – January 8, 2019) With the clock ticking towards new sanctions, Russian authorities said on Monday they would allow a World Anti-Doping Agency inspection team to return to a Moscow laboratory to retrieve data it had earlier been denied. Russia’s Sport Minister Pavel Kolobkov said WADA officials would return to Moscow on Wednesday. WADA also confirmed […]

“[WADA] reinstated Russia on Thursday despite a wave of protests, ending the nearly three-year suspension of the country’s drug-testing program because of a state-sponsored doping scheme. WADA’s decision after a vote of its 12-member executive committee was called ‘the greatest treachery against clean athletes in Olympic history’ by the lawyer of the whistleblower who helped uncover Russia’s cheating. WADA decided […]

“Russia will meet Croatia in the quarterfinals Saturday in Sochi, where it will play in a stadium built to stage the opening and closing ceremonies of those now-discredited Winter Olympics. And though there is no evidence of any wrongdoing with the soccer team, its performance here — including a round of 16 win over Spain, the World Cup champion eight […]

“… [when] FIFA’s 22-person executive committee awarded both the 2018 and 2022 World Cups … victories by Russia and Qatar … risky bids, were met with immediate speculation of vote bartering and outright bribery. … rumors of a Russian scheme to bribe referees on Spain’s behalf in the 2010 World Cup …. FIFA sent investigators to look into it … […]

(Moscow Times – themoscowtimes.com – June 1, 2018) Russian former anti-doping chief-turned-whistleblower Grigory Rodchenkov said on Thursday that one player in hosts Russia’s provisional World Cup squad had raised suspicions but he expected the tournament to be clean. Speaking by Skype from an undisclosed location in the United States, with his head covered by a balaclava and heavy-framed glasses, Rodchenkov […]

MOSCOW. April 2 (Interfax) – Russian anti-doping organizations could become branches of the World Anti-Doping Agency (WADA), which in that case would be responsible for their work, Russian Sports Minister Pavel Kolobkov said. “WADA is monitoring the work of all national anti-doping organizations and laboratories, and responsibility is borne by the states where these structures are located. The consequences of […]

“Despite the country being barred from the Winter Games, Russian athletes and fans showed up and had a good time. …”

MOSCOW. Feb 9 (Interfax) – There needs to be a reform of the global anti-doping system after the Olympic Games, but Russia has no direct influence on the composition of the leadership of international sports organizations, and the issue of International Olympic Committee (IOC) President Thomas Bach’s resignation is not being raised now, Chairman of the State Duma Committee on […]

(Moscow Times – themoscowtimes.com – February 8, 2018) Although Russia has long been a powerhouse in the Winter Olympics, its flag, anthem and tricolor will be absent from the games kicking off tomorrow in South Korea. After a blanket ban of the Russian Olympic team in December by the International Olympic Committee (IOC) over doping allegations, individual athletes have still […]

NOVO-OGARYOVO. Jan 31 (Interfax) – Russia hopes that international sports organizations will not turn into government departments in certain countries however powerful these might seem sometimes, President Vladimir Putin said. “Of course, we very much feel for our athletes who could not go to the Olympic Games. We will do everything to support them,” Putin said at a meeting with […]

What do Regular Russians Think of the IOC’s Olympic Doping Ban?

(Moscow Times – themoscowtimes.com – December 6, 2017) “This is undoubtedly a political decision,” says Igor, 40. In Moscow, news that Russia’s entire Olympic team had been barred from next year’s Winter Games was still sinking in on Wednesday afternoon. In the latest chapter of the Russian doping scandal, the International Olympic Committee’s President Thomas Bach on Tuesday evening announced […]

Interfax: Tragic events associated with informers in Russia, this institution must not migrate from sports to other spheres – Putin

KRASNODAR. May 23 (Interfax) – Russian President Vladimir Putin has called for treating the idea of introducing an institution of informers into Russian sports with extreme caution, recalling that tragic events are associated with this phenomenon in the Russian history. Speaking at the presidential council on physical training and sports on Tuesday, Putin warned against this institution the creation which […]

In a more detailed version of the report released in July, the head of the independent WADA commission has announced that the international doping scandal implicates over 1,000 Russian athletes, and has repeated accusations of state involvement. (Russia Beyond the Headlines – rbth.ru – ALEXEY MOSKO, RBTH – December 12, 2016) The publication of the long-awaited second part of the […]

If you think the Russian doping scandal has brought shame and humiliation to Vladimir Putin’s nation, perhaps you need to think again. Experts on Putin and Russia tell Yahoo Sports it may be the opposite: that the doping allegations and the Paralympic ban actually has confirmed suspicions widely held – the rest of the world is unfairly biased against Russia. […]

The latest and most comprehensive report on Russia’s cheating at the 2014 Winter Olympics gives the International Olympic Committee all the evidence it needs to ban every Russian team from the forthcoming Rio Games. The report, commissioned by the World Anti-Doping Agency to investigate a fast-growing body of evidence against Russia, is damning and unequivocal. … it affirms ‘beyond a […]

At the Winter Olympics in Sochi … no Russian athletes tested positive for doping, and to much celebration they took home 33 medals, more than any other nation. … behind the scenes, a system was in place that concealed the use of performance-enhancing drugs by … Russian athletes. … doping and coverups have been carried out by Russia across a range […]

TRANSCRIPT: [Putin] Statement in response to the report by the World Anti-Doping Agency

(Kremlin.ru – July 18, 2016) President of Russia Vladimir Putin: Recent events and the tense atmosphere that has formed around international sport and the Olympic movement involuntarily recall the situation in the early 1980s. Back then, many Western countries, citing the deployment of Soviet troops in Afghanistan, boycotted the Moscow Olympics. Four years later, the Soviet Union retaliated by boycotting […]

Less than three weeks before the Summer Olympics in Rio … an independent probe … produced the most damning evidence to date of a vast, state-sponsored #doping program run by #Russia’s sports officials that included corrupting the testing lab at the 2014 Sochi Olympics. … the report sets up a choice as delicate as it is momentous: whether to ban […] 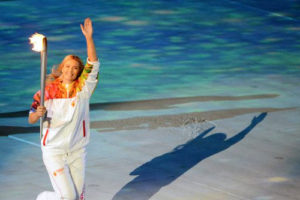 Maria Sharapova enrolls at Harvard Business School after being banned from tennis for two years. (Russia Beyond the Headlines – rbth.ru – NIKOLAI LITOVKIN, RBTH – June 27, 2016) Russian tennis player Maria Sharapova, who has been banned from tournament play for two years, will spend her disqualification period at the Harvard Business School. However, what exactly she will study […]

All Russians Are Tainted by Putin’s Regime

(Bloomberg – bloomberg.com – Leonid Bershidsky – June 21, 2016) The International Olympic Committee’s decision to let Russian athletes compete in the Rio Olympics if they can prove that they haven’t used performance-enhancing drugs won’t be popular with other countries. Nonetheless, it was the right call. But it also carries some unpleasant undertones: It formally requires Russians to prove that […]

Quarter of Russians view doping charges against athletes as groundless

(Interfax – November 21, 2015) One quarter of Russians – 25 percent – believe the World Anti-Doping Agency’s (WADA) charges against Russian track-and-field athletes are groundless and can be explained by hostile attitudes toward Russia in general, the Levada Center public opinion foundation told Interfax after conducting a poll of 1,600 respondents in 134 populated areas in 46 regions of […]

A Moscow Education, in More Ways Than One

(Moscow Times – themoscowtimes.com – Evan Haddad – July 27, 2015) A recent article published in British weekly Times Higher Education revealed that one in seven Russian undergraduates admits to cheating on exams. The figure is probably much higher. Any expat in Moscow teaching English will confirm that. Cheating in the Russian educational system is rampant, even acceptable. I experienced […]