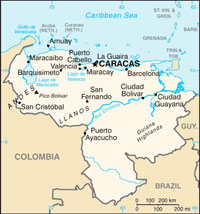 [Chavez’s death puts under threat Russia’s position in Latin America – ITAR-TASS – March 7, 2013 – http://www.itar-tass.com/en/c142/669826.html] ITAR-TASS takes a look at Russian press coverage of the death of Venezuelan strong-man Huge Chavez, and the impact upon Russian interests: The Russian newspapers publish broad comments on possible consequences of the death of Venezuelan President Hugo Chavez. According to some […]