RUSSIALINK: “Not enough applications from Russian citizens even for one flight from U.S. – Ambassador Antonov” – Interfax

WASHINGTON. April 7 (Interfax) – There are not enough applications from Russian citizens even for one flight from the United States amid the coronavirus epidemic, Russian Ambassador to the United States Anatoly Antonov said. “It is important that every compatriot who wishes to leave the United States for Russia gets registered in the relevant section of the Internet portal Gosuslugi. […] 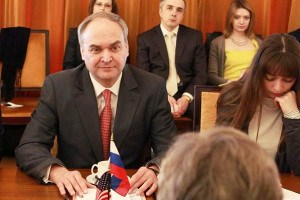 MOSCOW. Aug 31 (Interfax) – The United States has not submitted any three-stage plan of normalizing relations with Russia, new Russian Ambassador to the United States Anatoly Antonov told the Kommersant newspaper in an interview. “We have not received any ‘three-stage’ normalization plans from Washington,” Antonov said. “By the way, we sent a document containing our considerations on possible steps […]

Russia Set to Send ‘Bull Terrier’ Ambassador to Washington; Russia appears to be falling back on Soviet-era policy of disarmament as the focal point for relations with the U.S.

(Moscow Times – themoscowtimes.com – Matthew Bodner, Mikhail Fishman – February 9, 2017) Few watching the Russian Defense Ministry’s Dec. 2, 2015 press conference could have guessed the man speaking was a professional diplomat, let alone a skilled negotiator. “[Turkish President Recep] Erdogan and his family are at the heart of this criminal business. But even if their faces are […]

The Kremlin wants to appoint a hardliner as Russia’s new ambassador to Washington despite a thaw in relations between the countries. (Russia Beyond the Headlines – rbth.ru – NIKOLAI SHEVCHENKO, RBTH – February 6, 2017) Moscow is preparing to replace its ambassador to the U.S., and according to media reports the Kremlin is considering a diplomat specializing in military affairs […]

(Interfax – August 14, 2014) Russia remains committed to the Intermediate-Range Nuclear Forces Treaty (INF Treaty), although the situation has changed significantly in the world since this document was signed, and almost 30 countries hold such weapons today, Russian Deputy Defense Minister Anatoly Antonov has said. “One cannot fail to admit that the military and political situation in Europe and […]

MOSCOW, April 16 (RIA Novosti) – Statements that Russia allegedly threatens Ukraine and Europe with a military invasion are “nonsense,” Deputy Defense Minister Anatoly Antonov told Rossiya24 TV channel Wednesday. “All the horror stories that Russia will take over Ukraine today and tomorrow the Russian troops will reach the English Channel, Bordeaux and the Cote d’Azur are complete nonsense. We […]