Russia, U.S. have a lot in common in children’s rights protection issues – Astakhov 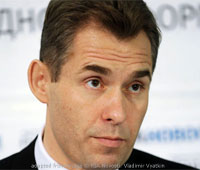 (Interfax – KHANTY-MANSIYSK. September 23, 2013) Russia and the U.S. are running into similar problems with the protection of the rights of children left without parental care, Russian presidential children’s rights ombudsman Pavel Astakhov said.

“The number of adopted children and the number of children living in foster families is about the same in Russia and the United States. For this reason, we often have similar problems and we need to resolve them together. We are ready to share our legislation and practical experience with the American forum participants,” he said at the Russian-U.S. forum on children’s protection held in Khanty-Mansiysk on Monday.

Astakhov pointed out that U.S. legislation does not require people seeking to adopt children to undergo special training, adding that a law requiring such people to undergo training was passed in Russia in November 2011.

“Unfortunately, we often see that there are no such federal laws in the U.S. That leads to problems which were recently revealed by U.S. journalists, where thousands of adopted children found themselves in an exchange chain, like used cars,” Astakhov said.

The Russian-U.S. forum on the protection of children from violence and cruelty is being held in Khanty-Mansiysk on September 23-24. The forum envisions visits by U.S. forum participants to Russian orphanages and joint master classes.

Some time ago, the U.S. media published the results of an investigation by journalists into the fate of children adopted in the U.S. According to the journalists, some people who had decided to get rid of their adopted children in the U.S. posted ads on social networking sites. As a result, orphans adopted from abroad, including from Russia, end up changing families, a process that is frequently accompanied by violations of the law.

According to the media reports, 261 children have been put up for exchange or sale in the U.S. An overwhelming majority of the children (70%) who were abandoned by their adoptive parents came from abroad, and at least 26 of them were adopted from Russia.