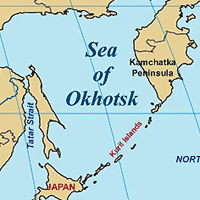 MOSCOW. Feb 7 (Interfax) – Russia will soon present the UN with the results of its research on the extent of the continental shelf in the central Sea of Okhotsk, and later in the Arctic Ocean more than 200 miles from the shore, official spokesman for the Russian Foreign Ministry Alexander Lukashevich said at a Thursday briefing.

“Russia has long been conducting systematic work on the proper clearance of its legal rights on the continental shelf beyond 200 nautical miles from the coast,” he said.

The first stage of this work, “namely, the performance of a set of field research and the preparation of scientific substantiation of the extent of the continental margin and, correspondingly, Russia’s right to the extended continental shelf, is almost completely finished,” Lukashevich said.

“At this point, there aren’t any international disputes on continental shelf delimitation in the Arctic,” Lukashevich said.

“The rights of a coastal state to the continental shelf are proven not in a scholastic dispute, but by presenting completely concrete scientific data. Russia will undertake diligent work on the scientific substantiation of its rights to the continental shelf, and we are confident that the delimitation commission will support its results,” he said.

Russia plans to apply to the UN for the establishment of an outer border in the Arctic at the end of this year. If the application to justify the new continental shelf boundaries is satisfied, Russia’s borders might expand by 1.2 million square kilometers. According to the country’s Natural Resources and Environment Ministry, the Arctic shelf may contain up to 5 billion tonnes of hydrocarbon resources.

Russian scientists point to the continental nature of the Lomonosov Ridge and the Mendeleev Rise and claim that they belong to the edge of Eastern Siberia. Other countries are also ready to join up in the fight for the shelf, including Canada, Iceland, Norway, Sweden, Finland and Denmark. Canada has already voiced its intentions to apply to the UN for the inclusion of the Lomonosov Ridge within its borders by 2013.